That was the message from the 130 security guards at Eurostar terminals, who walked out in a dispute over pay.

The guards, all members of the RMT union, work for Chubb, a subcontractor. They perform key roles in protecting staff and passengers, and screening baggage.

Earning as little as £6.36 an hour, they voted 100 percent in favour of strike action after bosses refused to negotiate a serious pay rise.

The RMT has only recently begun organising security guards. Beginning with just one member, the union has grown to 130 members — including a 25 percent rise since the ballot was called.

The security guards’ demands were loud and clear on the picket line.

They’re part of new groupings of workers who are no longer prepared to accept that they should have to suffer poverty pay just because their bosses have contracted them out over and over again.

Guards want to know why they don’t deserve decent pay yet their bosses reap ever greater bonuses.

At a meeting of all striking guards after the picket, the anger was clear.

Many of these workers have never been on strike before, but they understand the need for unity and solidarity, and they aren’t prepared to be “realistic”, as their bosses demand.

The pickets also have the dubious honour of being the first group of workers to fall foul of a new law banning protests around parliament.

Walking together under the union banner to the post-picket meeting, the police stopped them and explained that even south of the river it’s now illegal to march without telling the police first.

Instead of paying a decent wage, Chubb spent a fortune bussing in scab workers from across the country.

Indeed, the most apt chant from the picket line was also the one that was the loudest — “Chubb bosses — lock them up!”

Video of FBU president exposing how firefighter was run over 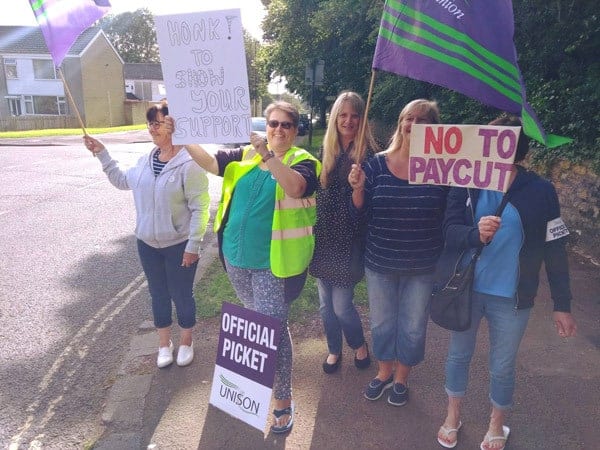 Budget lets the rich off the hook