This article is over 12 years, 2 months old
More than 2,000 drivers at East London Bus Group (ELBG) are to join the growing wave of unrest on the buses by striking on Monday over pay and conditions.
By Esme Choonara
Downloading PDF. Please wait...
Thursday 05 November 2009

More than 2,000 drivers at East London Bus Group (ELBG) are to join the growing wave of unrest on the buses by striking on Monday over pay and conditions.

The drivers voted by 84 percent for strikes against a pay freeze and a series of attacks on conditions at the company. Last minute talks between the Unite union and ELBG bosses failed to deliver any improvements on the zero percent pay offer.

A driver told Socialist Worker, “This will be the first time in 17 years that we have actually got out the door. Things have been building up for some time, and now they are boiling over. We feel that we have to make a stand.”

The strike will coincide with action by thousands of workers at First bus in the north west of England and in Essex who are also due to strike on Monday against a pay freeze.

As well as pay, other pressing issues at ELBG include a new round of attacks on pensions and a rise in disciplinaries.

One driver told Socialist Worker that the sharp increase in disciplinary action is creating a culture of fear among workers. “When you get into work, you worry about whether there is going to be a disciplinary letter waiting for you this time,” the driver explained.

Many workers believe management are trying to push out experienced drivers and replace them with new staff on the lower starter rates. 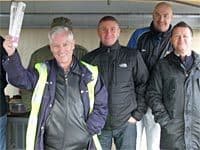 All routes lead to struggle on the buses