London bus workers to march for pay and conditions

This article is over 13 years, 6 months old
Bus workers across the different companies operating in London are to march on 24 July to demand better pay and conditions.
Downloading PDF. Please wait...
Tuesday 08 July 2008

Bus workers across the different companies operating in London are to march on 24 July to demand better pay and conditions.

The demonstration is called by the Unite union as part of its campaign to win drivers across the city £30,000 a year, or a 5 percent rise.

Peter Kavanagh from Unite told Socialist Worker, “The march will bring together our members from across the companies in a show of solidarity and send a clear message to London’s mayor that bus workers are getting organised and making their demands known.

“The background to this is that in a number of companies we are now moving rapidly towards industrial action in response to the offers that are not meeting our members’ aspirations.”

The workers will march to City Hall. London mayor Boris Johnson has said that London’s bus drivers are the “finest in the world”.

Union members say this should be reflected in higher pay, union recognition and better health and safety at all the London bus operators.

Bus workers at Metroline in north and north west London are set to ballot on Friday of this week on a pay offer worth just 3.5 percent. 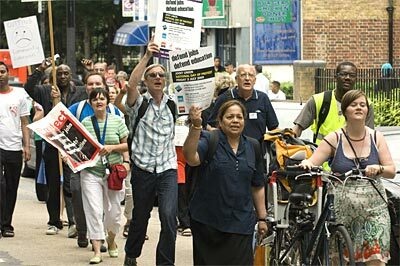 Tower Hamlets College shows how to fight over cuts

Union defiant in face of threats