This article is over 12 years, 2 months old
There will be huge climate protests around the world next Saturday 5 December.
Downloading PDF. Please wait...
Tuesday 24 November 2009

There will be huge climate protests around the world next Saturday 5 December.

In London, activists expect thousands of people to descend on parliament to take part in “The Wave”, organised by the Stop Climate Chaos Coalition, which is backed by over 100 organisations.

It aims to create a dramatic, visual protest that will surround parliament.

Chartered trains will bring protesters from major cities including Manchester, Birmingham and Leeds.

Some groups of activists are cycling to the protest.

The Campaign Against Climate Change, which is part of Stop Climate Chaos, has organised a rally in Hyde Park at 12 noon.

It will then meet the main march from the US embassy in Grosvenor Square to parliament to join the Wave.

A separate Wave event is taking place in Glasgow.

Activists will assemble at Bellahouston Park at 10.30am and begin the march at 11am. It will finish in Kelvingrove Park.

For more information, a full schedule of events and publicity materials go to » www.campaigncc.org or » www.stopclimatechaos.org 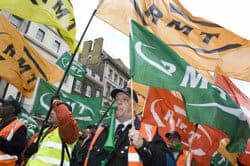