London council wants to send its homeless to the north

This article is over 9 years, 3 months old
Haringey council in north London is planning to move residents to the north—and even produced a PowerPoint presentation with a motorway sign to prove it (see picture, above).
By Tom Walker
Downloading PDF. Please wait...
Tuesday 16 October 2012

Haringey council in north London is planning to move residents to the north—and even produced a PowerPoint presentation with a motorway sign to prove it (see picture, above).

Phil Harris, the Labour council’s deputy director of community housing, delivered the presentation to a landlords’ forum in the borough on 20 September.

It spells out how the Tories’ benefits cap will make housing unaffordable for tenants. The cap is £350 a week for single people and £500 a week for couples. But the only solution it offers is for the council to send them off to “cheaper accommodation” in the north of England.

The picture of a motorway sign appears in two slides. Two further slides compare London rents to those in Birmingham and Bradford. The presentation was available on the council’s website, but has since mysteriously disappeared.

Under the plans a couple with four children would likely only be able to afford £111 a week in rent, the council estimates. And there is a map showing the most affected part of the borough—Tottenham.

Success on the tracks 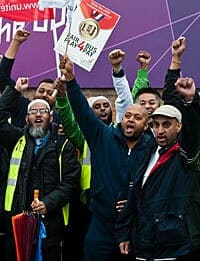 Keep up the fight to beat London bus bosses