This article is over 11 years, 0 months old
Firefighters in London have voted to accept new shift patterns proposed after their union called off strikes.
By Tom Walker
Downloading PDF. Please wait...
Wednesday 22 December 2010

Firefighters in London have voted to accept new shift patterns proposed after their union called off strikes.

The capital’s 5,500 firefighters struck in October and last month and planned to strike again on November 5, but their FBU union called the action off to go to arbitration.

The RAP arbitration came up with two possible deals. Today the union announced that 2,670 members voted to accept the recommendations, while 510 voted to reject them outright (not 51 as some media have wrongly reported).

Perhaps the most significant figure, though, was the turnout in the ballot: just 58 percent, which is low for the FBU.

The low turnout in the deal ballot reveals a mood of resigned acceptance among union members.

The majority who voted followed the union’s recommendation, while a militant minority, about one in six, voted to reject both deals – but more than four in ten did not cast a vote at all.

This is hardly a ringing endorsement of the way the union bureaucracy has handled the dispute.

And despite the deal over shifts, the dispute between the union and the fire authority is far from over.

Since the union called off the strikes, management have got even more bullish.

They still haven’t returned the 27 fire engines they confiscated during the strikes for scabs to use. Earlier this month a woman died in a fire in Holloway, north London – firefighters say she might have been saved if it wasn’t for the local fire station’s missing engine.

Firefighters are still suspended from work, including Sian Griffiths, a prominent FBU union activist and one of the first women firefighters recruited in Britain – even though union officials have repeatedly promised that there will be no deal until the suspensions are lifted.

Union members following the action short of a strike are still being docked pay – hundreds upon hundreds of pounds in many cases.

Bosses are making up policy on the hoof, breaking agreement after agreement with the union, most recently instructing a large number of firefighters to stay away from work over Christmas, apparently to save cash on higher seasonal rates of pay.

And the fire authority’s threat to start mass sackings of firefighters – the threat that started the dispute in the first place – still hasn’t been formally withdrawn and hangs over everyone’s head.

FBU union officials have been critical of Socialist Worker’s coverage of the fire dispute, which has included running articles by firefighters disagreeing with the officials’ strategy.

But the fundamental argument remains that going to arbitration meant control of the dispute passed out of the union’s hands.

Now the ballot is over, the union will sit down with fire brigade management to negotiate over the details of the settlement.

With the bosses in a belligerent mood, there is a real risk that they will try to do what they did after the national firefighters’ strikes of 2003: extract concession after concession from the union.

Firefighters must remain on guard – and be ready to put the strikes back on if the bosses start making extra demands.

Update, 24 December: The union has today also suspended the industrial action short of a strike that London firefighters have been taking since September. The fire authority bosses meet on 13 January – union reps will then meet again to discuss what to do next. 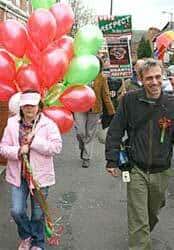