London: now you can vote socialist

London: now you can vote socialist

SOCIALISTS WILL be standing in the elections for the Greater London Assembly in May. The contest for London mayor has exposed deep seated resentment with Blair’s Tory policies. Working people deserve better than New Labour.

Ken Livingstone has promised to keep the tube network in public hands. But he continues to backslide in the face of attacks from Labour’s leaders. Last weekend Livingstone offered the deputy mayor position to Glenda Jackson. Jackson has run an honest campaign. But her honesty has revealed how right wing she is. She is even more for privatisation than Frank Dobson. Even if Livingstone is elected as Labour’s candidate for mayor, Blair plans to surround him with New Labour clones. They will block any slightly radical measures.

That is why socialists, trade unionists and activists have united in the London Socialist Alliance (LSA). The LSA will contest seats on the Greater London Assembly, the new body which will come into operation at the same time as the mayor. Over the next few weeks elections will be taking place to select local LSA candidates.

So far six candidates have been elected: Paul Foot, Mark Steel, Kate Ford, Greg Tucker, Jim Stanley and Janine Booth. More will be elected over the next month.

THERE WILL be two ways of electing a GLA member. Everyone will have two votes, similar to the method used for the Scottish Parliament and Welsh Assembly elections last year.

Each constituency will elect one candidate using the first past the post system. This is the same system that is used now to elect MPs and councillors.

“THE BLAIR bubble has burst. Working people have had enough of the fat cat culture and are appalled at the return of Tory sleaze. Now, more than ever, people want to hear the socialist argument for a well funded NHS, and an end to police racism and the chaos of privatisation. Our candidates have a proven record of helping people fight back against poverty and injustice.”

“I AM a teacher, trade unionist and active socialist. The GLA election represents an opportunity for workers to say we have had enough of Blair. We need to transform the anger with New Labour’s right wing policies into effective action against New Labour. Education will be one of the major issues in the election. We have to stop the privatisation of education.”

“I’M STANDING because I’m the brother of Harry Stanley. The Metropolitan Police gunned down Harry in the street. If I get elected I will fight to make the police accountable for their actions. I used to be a TGWU union convenor. I will stand up for all working people. I want to see a fair and equal society for all, and I want to see justice for all victims of police brutality, black and white.”

“I HAVE been a rail worker and active trade unionist since the 1970s. Last year, as the united left candidate, I got over one third of the votes in the election for RMT general secretary. Rail privatisation has been a disaster. New Labour wants to repeat this disaster on the underground. We need a publicly owned transport system. The London Socialist Alliance can show that there is an alternative to Blair’s Tory policies.”

“TONY BLAIR believes the free market is popular. But more than at any other time in memory huge numbers of people believe that the railways should be renationalised and the rich should pay higher taxes. I have been an active socialist for over 20 years. I was sacked as a columnist in the Guardian last year because of my opposition to New Labour, and my support for the Liverpool dockers and other strikers.”

“I have been active in the Campaign Against Tube Privatisation and I have actively campaigned against bigotry and prejudice. It is down to rank and file workers and the LSA to organise independently and stand up to this bosses’ government.|

Why we’re backing the LSA candidates

“JACK STRAW is increasing the powers of the police to ‘stop and search’. The black community feels New Labour does not represent them. It’s time for everyone to get behind the London Socialist Alliance.”

“IT’S GREAT news that London Socialist Alliance candidates are standing. Blair has taken manipulation by Labour leaders to new despicable depths, dragging the wretched Dobson in his wake. Now at last there are people who will stand up for everyone who lives and works in London.”

“I SUPPORT the London Socialist Alliance slate because it’s critical that real socialists have our backing. We have to stop politics becoming something that is engineered by Labour Party spinners.”

“GIVEN THE catastrophe New Labour has become I think it is important to have real socialists standing in the London election. I will be giving my full support to the London Socialist Alliance.”

“IF IT wasn’t for the support of black and white trade unionists Pricecheck workers would never have won union recognition. Not once did a New Labour MP back our struggle. I will be urging all low paid workers and everyone who backs union rights to support the London Socialist Alliance.” 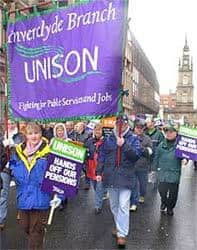 CWU to ballot for action over pay