Thousands more people lined the route to watch the march and parade as it moved through the streets of central London from Baker Street to Trafalgar Square.

For the first time Respect organised a float for the event.

Paul Fredericks, a Respect list candidate for the Greater London Assembly elections next year, told Socialist Worker, “We got a great reception from the crowd, with lots of clapping and cheering.

“It was a fantastic day. Our float was really diverse, showing the make-up of Respect – old and young, black and white, men and women.

“People really loved our peace flags and gave us raised fist salutes and peace signs as we went past. We got a particularly good reception from members of the black community.”

Respect members also handed out thousands of leaflets explaining the party’s policies against discrimination of any kind and in favour of equality.

The leaflet also points out that Respect campaigns against homophobic attacks and all acts of prejudice.

There was a good presence of trade unionists on the march.

There was also a float from the Imaan support group for LGBT Muslims.

It was bedecked with the flags of Muslim nations and adorned with placards such as “Free Palestine”, “No to Islamophobia” and “End the occupation.” Another placard read, “Here, Queer, Not drinking beer!” 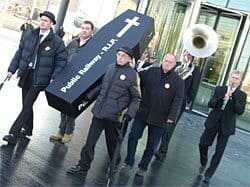 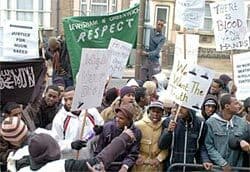