London rallies to back Egypt’s revolution

Thousands of people took to Trafalgar Square in central London today, Saturday, the day after Egyptian dictator Hosni Mubarak finally stepped down. People sang, chanted and danced to celebrate the fact that Egypt’s 30-year old dictatorship was over.

Abdullah was in the crowd with his partner and children. He told Socialist Worker, ‘I have been outside the embassy most days since the revolution started. I will now be proud to show my children the country where their parents are from, to show the Tahrir Square and all the other places where the protests happened.

‘The Egyptian people have changed their own lives, and the lives of all of us. Today is the day for celebration, but tomorrow the fight goes on for the heart of the country. What the future holds I don’t know, but I have faith that the Egyptian people will not give up.’

One Syrian activist told the crowd, “Thank you Tunisia, thank you Egypt. You gave us the example and we want to do the same. Syria’s dictator says we are not ready for freedom. I say we are ready. We are going to do it.”

The TUC and Amnesty International called the rally.

He said, “In the last two to three days in Egypt there have been strikes of bus workers, rail workers, and maritime workers on the Suez canal. This is great. I hope Egyptian workers can show leadership around the Arab world.

“Democracy is about the people taking control – that’s what we want to see.”

London had erupted with street celebrations on Friday evening, after people heard that Mubarak had gone.

On Edgware Road in west London, the streets were alive with joy. Bus drivers honked their horns and cars flew Egyptian flags as people celebrated on the main road and side streets on Friday night.

Saira, a British Egyptian told Socialist Worker, ‘Don’t ever let anyone say that protesting never achieved anything. Today ordinary people like us changed the world. Of course we have to see what comes next, but tonight we can be glad of this huge event.

“My parents said they thought they would die with Mubarak still in power. I’m so glad they have seen the start of a new Egypt and a new future.’

Another woman said, ‘I trust the army to look after the country for now, but we need elections very soon.’

But her friend interrupted saying, ‘I’m not so sure about the army. In the last few days they tried to stop people from protesting. They did not fight on our side all the time so I hope the people carry on protesting and make Egypt truly free – from Mubarak and all his friends. 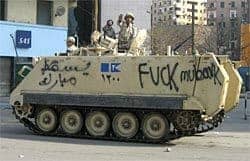 Is Egypt’s army on the people’s side?