This article is over 15 years, 1 months old
Around 300 Respect members in London attended a meeting on Monday to select the Respect candidates for the mayoral and London Assembly elections in May next year.
Downloading PDF. Please wait...
Tuesday 17 April 2007

Around 300 Respect members in London attended a meeting on Monday to select the Respect candidates for the mayoral and London Assembly elections in May next year.

The vibrant meeting showcased the diverse and multiracial nature of Respect. The London Assembly elections use a proportional representation system, so there is a real chance that Respect can get its candidates elected next year.

Lindsey German was selected by a unanimous vote to stand as Respect’s candidate for London mayor. Lindsey and Tower Hamlets councillor Oliur Rahman were selected to head Respect’s list in the assembly elections.

Lindsey German said, “We have selected a whole range of people from different ethnic minorities, men and women, gay and straight, those who are religious and those who are not. We are organising for the basic equality that everyone should have the right to.

“If we get people elected next year, that will change London – people will know there is a voice for the voiceless and the poor.”

Respect MP George Galloway told the meeting, “In next year’s London elections we have a chance that Respect’s weight will be properly calibrated. If we win 5 percent of the vote on the list, we will be guaranteed a place on the assembly.

“If Lindsey German was an assembly member, I assure you that everyone in London would know what the assembly is.

“If we received 8 percent of the vote, we would have two members in the assembly. The prize is great and achievable – if we fight the way we have done so far and maintain our unity.”

John Rees, Respect’s national secretary, said, “We are already facing the argument that if people vote Respect it will let the Tories in. If we accept that argument in the assembly elections, we will have to accept it in every election.

“Respect was formed to be a radical, left alternative to New Labour – and nobody is going to force us out of doing that.”

Respect groups in the 14 London Assembly constituencies will select their candidates over the next few months.

For reports on Respect’s local election campaign go to Time to elect fighters from Respect.

For more on Respect go to www.respectcoalition.org 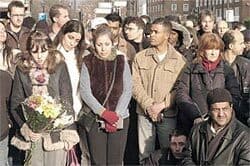 In every continent... Rage against the system