Protesters forced a McDonald’s on London’s Oxford Street to close today, Saturday, in the latest protest against the Tories’ workfare schemes.

The protest was organised by the Right to Work campaign. It visited two McDonald’s, a Boots and an HMV.

Protesters ran from shop to shop, stopping traffic as they went, with police in confused pursuit.

The second McDonald’s shut its doors as a dozen officers formed a line to protect it.

Sara Tomlinson, a teacher and NUT union member in Lambeth, brought her branch union banner to the protest. She said Tory ministers’ recent attacks on the protests “smack of desperation”.

“This is a hugely popular campaign,” she said. “It’s a disgrace that companies like McDonald’s that make billions take on young people for nothing.”

Ian Crosson, a member of the UCU union at Tower Hamlets College, had brought a banner too. He said, “The UCU is affiliated to the Right to Work campaign. We have to unite paid workers with unemployed people.

“A lot of students are looking for jobs since the government cut EMA. Some can’t afford to travel in – some can’t even afford lunch. It’s outrageous that these companies would exploit them.”

All agreed to continue targeting McDonald’s, and other firms that use unpaid labour, until they withdraw from the schemes. 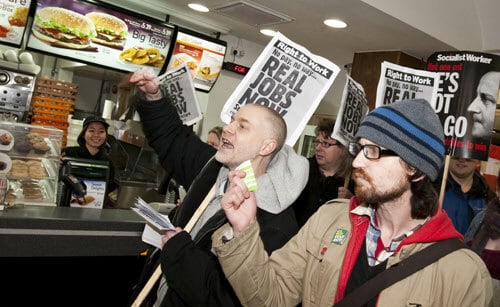 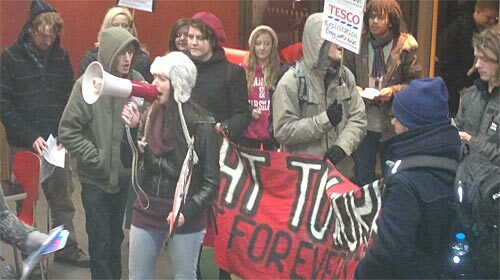