Londoners prepare to turn out against racist EDL in Tower Hamlets

The EDL is a racist organisation that targets Muslims. It has a hardcore of fascists at its centre.

EDL leader Tommy Robinson was arrested in Tower Hamlets in June, after he tried to head for the East London Mosque. His bail conditions ban him from entering the borough for now.

But he pledged on Twitter, “I can’t wait till my bail conditions are gone so I can enter Tower Hamlets! I’m going straight to the East London Mosque #fact.”

The EDL has organised large demonstrations in Birmingham and Newcastle since the killing of soldier Lee Rigby in Woolwich, south London, in May. 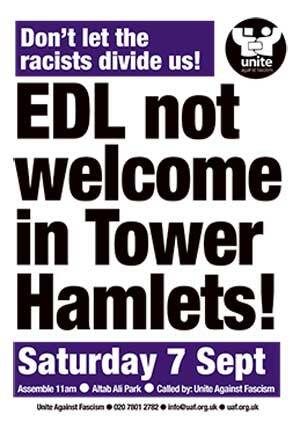 Unite Against Fascism called the demonstration

But the racists have faced huge opposition across Britain, being outnumbered in most places.

EDL initials have been sprayed on mosques and Muslim graves—including the remains of the burned out Al Rahma Islamic Centre in Muswell Hill, north London.

The Unite and Unison trade unions are backing it along with the London Muslim Centre. These are key components of the local coalition that blocked the EDL from marching in 2011.

Dilowar Khan, director of the London Muslim Centre, told Socialist Worker, “Racism, hatred, bigotry and Islamophobia must never be tolerated. We must stand united against such threats which seek to harm us all.”

Tower Hamlets mayor Lutfur Rahman supports the demonstration—but is also calling for a ban on the EDL march. So do many others

The EDL is a real threat, especially in the context of increased Islamophobic attacks. Tower Hamlets residents, particularly Muslims, will not be safe if they are allowed to march.

But a ban is a mistake. 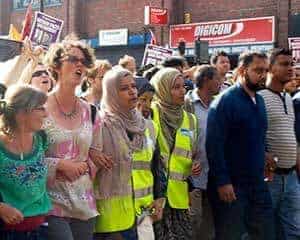 The EDL would still have the right to a static assembly, which they could effectively march into and out of under heavy police escort.

The EDL was banned from marching in 2011 but its supporters turned up anyway.

They were only kept out thanks to thousands of anti-fascists—who defied a protest ban themselves to send the EDL packing.

A ban strengthens the hand of the police, who are hostile to anti-fascist demonstrations. We can only rely on our own mass mobilisations, not the cops.

“We have to mobilise to make sure the EDL do not come to Tower Hamlets,” said Weyman Bennett, UAF joint national secretary.

“We have stopped them with our mass numbers before and we must do so again.”

Taking on the Nazis in Greater Manchester