AS A Rover worker, I’ve always had the misguided image of a teacher as middle class, elitist and a touch arrogant. I couldn’t have been more wrong. I went to the NUT conference in Harrogate recently to speak at a fringe meeting. The teachers I met were very friendly and just your typical normal working class men and women. We spoke the same language. We found common ground with each other in that we both are suffering at the hands of Labour’s brutal capitalist policies. I gained an insight into their plight and I think they learned of our plight too. Their plight isn’t all about money. It is about justice for teachers, justice for parents and justice for pupils. They want to retain goodwill between teachers and parents alike and not let the issue of performance related pay cause divisions. I went to the conference in a Rover car. The teachers put “Estelle” over the driving seat and “Doug” over the passenger seat to show Labour’s Estelle Morris is taking Doug McAvoy for a ride. We stood hand in hand with each other during our protest-an unlikely collaboration in anyone’s eyes. Let this teach us that solidarity and democracy hold no barriers.

THIS YEAR’S National Union of Teachers conference was a marked improvement on previous years. Right from the start there was a mood for change. There was a massive anger, not just against the introduction of performance related pay, but also against privatisation and Labour’s attacks on comprehensive education.

Speakers who talked of the need for a socialist alternative to the priorities of the market struck a chord. The anger against the system goes much wider than young people. Delegates are sick and tired of Labour attacking us, and our union leaders offering us no alternative. There was massive support for conference delegates who brought an emergency motion attacking Jack Straw’s asylum legislation. Every speaker in the debate emphasised that none of us had expected New Labour to go so far towards opening the floodgates of racism.

THE LABOUR Party has abandoned working class people. It has betrayed our concerns and our interests. That is why I am resigning from the Labour Party and am proud to stand for the London Socialist Alliance in Havering & Redbridge. I was an activist in the EETPU, the forerunner of the AEEU union, for 14 years. I was the senior steward at Thames Television and was a part of many solidarity actions with other groups of workers.

I joined the Labour Party in the belief that it could change the lives of ordinary people for the better. Then in 1997 Labour won that huge majority. With so many MPs Tony Blair could have turned the sky green. He could have changed the date of Christmas. In fact he has done nothing to strengthen workers’ organisation. The price is hundreds of thousands of jobs lost.

Employers know the laws protecting workers in Britain are very weak so they choose plants here for closure. If workers want to fight back they are hit by harsh anti-union laws. New Labour listens to the bosses and ignores our side. That is why I hope that people who have previously voted Labour will recognise that their party has left them, and it is time to look for a socialist alternative.

Empty promise of work for all

I’VE BEEN aware all my life that I was going to be disabled. I was born with a deformed hip which means one leg is nearly two inches shorter than the other. I used to work as a lab technician in a quarry. But I left because it was pretty painful to lift the heavy rock samples.

I was then unemployed for eight years. I used to get hassle from the dole office because I had loads of interviews but no jobs. The press and politicians, like New Labour’s Tony Blair and David Blunkett, go on about people like me being “scroungers”. So I felt really good when a mate offered me a job as a kitchen assistant. It’s not ideal-it kills my leg. But it’s the first job I’ve been offered so I jumped at it.

Now the dole office have said if I am doing the job it means I’m “fit for work” and they have cancelled all my disabled benefits. My part time job means I take home around 44 a week. My benefits used to pay me around 117 a week. I feel completely disillusioned. I’ve done what the government wanted and got a job. Now they’ve decided I can’t have a living wage. I voted Labour in the general election but I’m not going to vote for them any more.

Who will lead the new mood

ABOUT 800 patients, staff and local residents from Harefield, Hillingdon, west London, marched on Downing Street last week to hand in a 120,000 signature petition. They are determined to stop the closure of the world famous heart and lung hospital, and the removal of services to a new site in Paddington.

The London Socialist Alliance is supporting this campaign, but it has been led by my Tory opponent and Harefield resident Richard Barnes. His main tactic has been to deem the campaign “non-political”. This is quite easy as Labour and Lib Dems have not been near it! We faced a mixed reception as people rallied in the pouring rain. Some refused our leaflets, others were interested in our “People before profits” slogan.

A nasty minority objected to our defence of asylum seekers, spouting the tabloid lies with venom. But I started a chant of, “Tony Blair, hear us say-Harefield Hospital’s here to stay! He says greed, we say need!” By the time we reached Whitehall almost the whole demo had taken up this chant. It is clear that the Tories are trying to tap into the anti-Blair mood. Socialists have to intervene confidently to make sure the anger and activity are not led down a right wing diversion.

Wide support for the Gypsies

MORE THAN 50 people attended a meeting recently in support of our local Gypsy community who are threatened with eviction. The meeting showed that there is strong support from ordinary working people against racism. More than 15 Gypsy families have lived on land inside the Plymouth boundary for over 20 years.

Last month bulldozers forcibly moved the permanent caravans and smashed utility sheds, cutting off water and electricity, and placing children and residents at risk. The families are now forced to live on a three metre wide roadway, and face eviction on 4 July. The Campaign for Justice is calling on the Labour council to create a permanent site.

The local Trade Union Council and Race Equality Council have voted unanimously to sponsor the campaign, and letters in the press have identified the hypocrisy of a Labour council that says it is committed to anti-racist practices and an anti-poverty strategy. 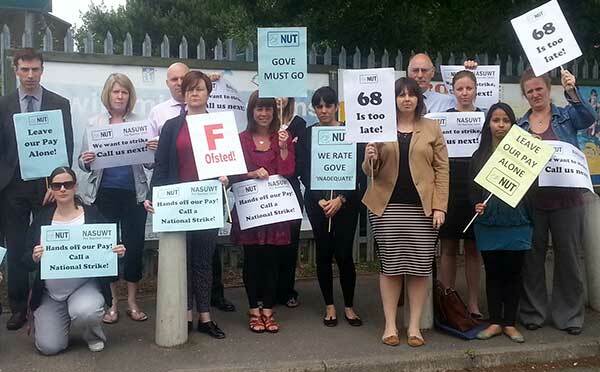 Strikes not ‘unpopular’ - what the teachers survey really showed

'The government haven't broken us'

Two days of strikes made the bosses listen 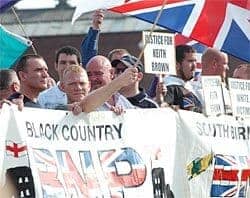 The BNP shows its true Nazi colours in Stoke