This article is over 11 years, 5 months old
The TUC’s evidence to Lord Hutton’s pensions review smashes the lie that public sector pensions are a drain on the state.
Downloading PDF. Please wait...
Tuesday 03 August 2010

The TUC’s evidence to Lord Hutton’s pensions review smashes the lie that public sector pensions are a drain on the state.

It has shown that public sector pensions are affordable and sustainable—and that no further immediate changes need to be made to pension schemes.

Unfortunately the TUC has accepted some attacks on pensions—including raising pension ages and linking them to the CPI rate of inflation instead of the RPI one.

But it is right to refute the lie that pensions aren’t affordable, and trade unionists can make use of the TUC’s material in their struggles to defend pensions.

An Audit Commission report, given to Hutton as part of his review, recommended that the government raise the retirement age for council workers and increase their contributions.

It says there is a “shortfall” in the scheme. But this shortfall would only occur if the scheme paid out pensions to every member now. This isn’t what will happen, as people retire at different ages and continue contributing until that time.

In fact, the GMB points out, the local government scheme is making money.

It says income from investments and contributions exceeds outgoings by £4-5 billion every year.

Read the TUC’s submission to the Hutton review at www.tuc.org.uk/extras/responsetohutton.pdf and go to www.gmb.org.uk/pspc for the GMB’s submission. 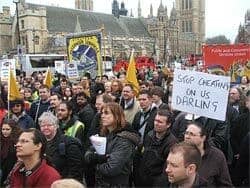