This article is over 12 years, 1 months old
Swansea anti-fascists did not let the Welsh Defence League derail their plans for a gig
Downloading PDF. Please wait...
Tuesday 20 April 2010

The racist Welsh Defence League attempted to disrupt a Love Music Hate Racism gig organised by students at Swansea College of Art. The gig was due to be held at Mozarts in Swansea.

“On Saturday the venue began to receive threats of trouble if the gig went ahead,” Fred told Socialist Worker.

A YouTube EDL video entitled “A message to UAF” was sent to the venue and to the students who organised the event.

“The venue pulled the plug, but the students got another venue and 40 people came,” says Fred.

“It worked to build support for UAF—people were furious and some who had just come to enjoy a night out were politicised.

“We have decided to take the matter seriously and the police have been informed.

“We will be asking the labour movement for support in planning and defending a bigger LMHR gig in the future.” 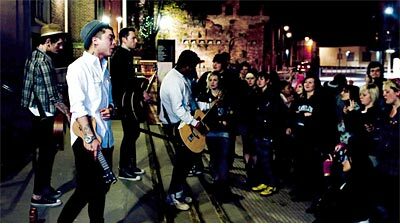