WESTERN GOVERNMENTS were desperately trying to impose a ceasefire on government forces and Albanian guerrillas in Macedonia at the start of this week. But NATO and European Union intervention is ensuring that tensions and the threat of civil war remain.

On Monday of this week we saw how devastating that could be. Anger at what Western governments had done led to Macedonian soldiers, police and reservists attempting to storm the parliament building. But their targets were not just politicians. The signs were that there could also be murderous attacks against Albanians.

Fighting first erupted in February. Albanian guerrillas of the National Liberation Army moved to seize parts of western and northern Macedonia, which border Kosovo and southern Serbia. Albanians are between a quarter and a third of the two million people in Macedonia.

They suffer discrimination. But the Albanian guerrillas’ aim is about more than challenging that.

It is calculated to provoke a repressive response from the Macedonian army, so deepening ethnic divisions and driving more of the Albanian minority behind the guerrilla forces. That is the same strategy Albanian guerrilla forces used in neighbouring Kosovo in 1998. The Albanian forces are calling for deeper NATO intervention in Macedonia.

NATO and the European Union say they are opposed to the guerrillas’ attempts to split Macedonia along ethnic lines. But NATO’s intervention in Kosovo two years ago and continuing presence there has encouraged the Albanian guerrillas.

The West is caught in a trap of its own making. It wants the guerrillas in Macedonia disarmed. But it fears clamping down on them itself because that could lead to conflict between Albanians and NATO troops in Kosovo.

Tony Blair and other Western leaders said two years ago that removing Serbian leader Slobodan Milosevic would bring peace to the Balkans. Milosevic remained in power for another year. It took an uprising by ordinary Serbians (victims of NATO’s bombing) to unseat him.

Now the West is demanding that Milosevic is tried by its own war crimes tribunal. Milosevic is guilty of war crimes. But so too is NATO. The same Western governments that have fuelled ethnic tensions in Macedonia are also insisting on a crash programme of privatisation and neo-liberal policies there.

The reality of Western military and economic intervention in the Balkans is increasing poverty and inequality, which has sown the seeds for ethnic strife.

Part of shaping anger with Blair 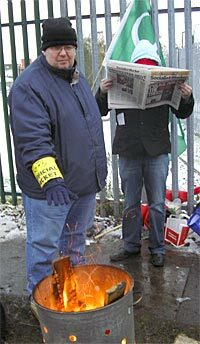 Debts bring a tide of misery