This article is over 17 years, 2 months old
Many arguments over what should be done to save Longbridge could be heard among Rover workers and on the streets of Birmingham at the weekend.
Downloading PDF. Please wait...
Saturday 16 April 2005

Many arguments over what should be done to save Longbridge could be heard among Rover workers and on the streets of Birmingham at the weekend.

But none of them received even an acknowledgment from New Labour or the other mainstream parties.

The Tories and the Liberal Democrats sought to score political points over the crisis. But both said they, like New Labour, would do nothing to buck the market and save the plant.

John Hemming, the leader of the Liberal Democrats on Birmingham council, shows why no one should be taken in by the idea that they are somehow left wing.

He is a multimillionaire businessman who had a hand in the Phoenix takeover of Rover five years ago.

Hours before the announcement that the company was going into receivership last week he was telling the media there was no crisis because Phoenix bosses were “on track” to negotiate a bailout.

“The mainstream parties are hypocritical and people are seeing right through them over this,” says Kevin Flanagan, who has worked at Longbridge for 15 years.

“Five years ago, when 100,000 people marched to save the plant, some of us were saying it should be nationalised. We were right then, and we are right now.

“The only party that’s saying that today is Respect. They are standing in two constituencies in Birmingham.

“I hope that car workers will give Respect all the support they can, no matter where they live.”

Salma Yaqoob is Respect’s candidate in the Sparkbrook & Small Heath constituency in Birmingham. She says, “Rover workers and their families deserve better.

“The loss of 6,000 manufacturing jobs at MG Rover and a further 25,000 in related industries will have a devastating impact throughout Birmingham and the West Midlands.

“If New Labour can spend £6 billion to wage war on Iraq why can’t they spend a fraction of that to save jobs in Birmingham?

“I support the call of Birmingham’s top historian, Carl Chinn, and the Evening Mail to launch an immediate campaign to save car production at Longbridge.”

Kevin Flanagan adds, “We should march again. The unions should act now during the election campaign.

“The time to put pressure on the government is precisely now.

“We’ve got nothing left to lose. And no matter what we win, we should not go down without a fight.” 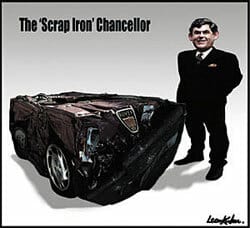