Manchester anti-war demo: ‘The war should end with Blair’

This article is over 14 years, 6 months old
Thousands of anti-war protesters gathered outside the Labour Party special conference last Sunday as Gordon Brown was anointed the new leader of the party without a contest.
By Esme Choonara and Matthew Cookson
Downloading PDF. Please wait...
Tuesday 26 June 2007

Thousands of anti-war protesters gathered outside the Labour Party special conference last Sunday as Gordon Brown was anointed the new leader of the party without a contest.

More than 5,000 people braved the Manchester rain to join the Stop the War demonstration. They demanded a change of policy, not just a change of leader, and calling on Gordon Brown to get the troops out of Iraq and oppose any attack on Iran.

Many bystanders and shoppers turned to wave and clap as the lively demo wove through the streets.

Lindsey German, the convenor of the Stop the War Coalition, spoke at the rally at the end of the march. She said, “We will march in any weather until the troops are home.

“Tony Blair is going this week. But he shouldn’t be sitting in luxury houses and going on the lecture circuit in the US.

“He should be facing a war crimes tribunal. Gordon Brown should stop these policies, withdraw troops from Afghanistan and Iraq, and not attack Iran.

“This is an impressive demonstration. We are saying to Gordon Brown that if you don’t change policies, your legacy will be the same as Tony Blair’s.”

Activists came from across Britain, determined that Brown should not be allowed to ignore the issue of Iraq.

“Since the school walkouts in 2003 a new generation of school students has got involved.

“We know Gordon Brown is here today. We won’t let the issue of Iraq disappear with Tony Blair. We want troops out of Iraq and troops out of our schools – an end to military recruitment in schools.

“School students may not be able to vote, but we can still have a say in what happens in the world.”

Ruby added, “People think that young people are not interested in politics. But you can see from this demo that lots of us are very active and very angry.”

Some on the protest felt that Gordon Brown would be more likely to listen to the anti-war movement than Blair was.

Students Sophie, Daniel and Chloe came to the protest from Macclesfield. Daniel told Socialist Worker, “I felt I had to be part of this protest. Most people want the troops out.”

Sophie said that she hopes that Brown will be better than Blair and that he will listen to the Stop the War movement.

Chloe agreed. “I think Brown will do something about Iraq,” she said. “After all, surely there are votes in it.”

Others disagreed. Marcus Barnett, a shop worker from Chorley, Lancashire, told Socialist Worker, “I don’t think that Brown will be any different to Blair. Brown is the shameless face of war and privatisation.

“I heard that Brown is going to allow us to demonstrate in Parliament Square again – it’s as if he is granting us ‘democracy’ as a privilege.

“We will have to keep up our struggle.”

Farhan Ali, a former Respect council candidate in Bradford, came to the demo with Bradford Stop the War. “People will quickly see that a change of leader is not the same as a change in policy,” he told Socialist Worker. “On this occasion we need to throw out the baby and the bath water.”

Farhan said that the war was a big issue in his recent election campaign. “The war has had a big impact on working class people,” he said.

“People can see that the money should be spent on local amenities and public services. We need to build Respect as an alternative to New Labour – one that can work on the basis of hope, not despair.”

There were many trade union banners on the demonstration, alongside banners from Stop the War groups, peace groups and other campaigns.

Rachel Ingleby, who came with a delegation from Kirklees Unison, told Socialist Worker that she had completed a 10 kilometre run for cancer research in Leeds before coming to the demo.

“There were a lot of health workers on the run talking about how underfunded the NHS is,” she said. “I work in the public sector too. We want money put into public services, the NHS, cancer care – not spent on war.

“Gordon Brown is just Blair in different clothes. The unions have to be realistic. We can’t rely on our so-called ‘friends’ in the Labour Party. There is a lot of support in the public sector for industrial action over pay – we need united action across the unions.”

A large delegation of workers from Remploy joined the demonstration. They were protesting against the planned closures of 43 factories.

Billy, a member of the new Unite union from the Remploy disabled workers’ factory in Aintree, told Socialist Worker, “Skilled people should not be put on the dole. The board should be sacked, not us.

“Gordon Brown needs to listen to the people, just like he said he would. If he doesn’t we will keep protesting and there will be a strike ballot.”

Several members of Military Families Against the War spoke at the rally about their anger over the war in Iraq.

Rose Gentle, whose son was killed in Iraq, said, “When Brown takes office this Wednesday, Military Families Against the War will be outside Downing Street to say bye-bye to Blair and to let Brown know we are not going away. We will not stop until we get a public inquiry into why we went to war.

“It is three years this week since my son Gordon Gentle was killed in Iraq. We want to know whether Gordon Brown will come and meet military families after Blair has been a coward and refused to meet us for the last three years.” 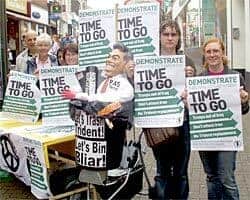 Come to Manchester demonstration and help drive out Blair 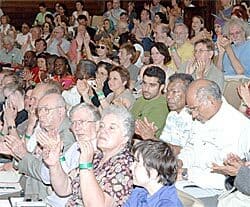 Why we have to fight back now