This article is over 10 years, 3 months old
The Tories got a taste of the anger against them as a huge demonstration swept past their conference in Manchester on Sunday. Up to 35,000 people joined the march, which was initiated by Right to Work and organised by the TUC.
Downloading PDF. Please wait...
Tuesday 04 October 2011

The Tories got a taste of the anger against them as a huge demonstration swept past their conference in Manchester on Sunday. Up to 35,000 people joined the march, which was initiated by Right to Work and organised by the TUC.

There was a particularly strong showing from the north and north west of England. The day was a clear indication of the growing determination to fight back.

Juliet Wilson, a Chartered Society of Physiotherapists member, told Socialist Worker, “This is theft. We’re going to have to work longer, pay more and get less. How do they expect us to work until we’re 68 and still be able to treat patients?”

Liz Cameron is assistant branch secretary for Unison Salford local government branch. She said, “We’re marching to show that we won’t stand by and do nothing as this country is torn apart by cuts.

“Instead of cutting our services and pensions they should impose a tax on the banks and stop the very rich from avoiding their taxes.”

An energetic feeder march of hundreds of students joined the demonstration from outside the University of Manchester. hey lit flares and chanted, “If you cut our education, we’ll go into occupation.”

Pura Ariza, a UCU union member at Manchester Metropolitan University, told protesters, “We are not prepared to sit back. We are going to fight. After our strike on 30 November we will continue to fight. We will stand up and we will be heard.”

Hundreds more people came on a feeder march from Salford. Alice Cootes, a pensioner from Salford, said, “The Tories are not for the working class and never have been. I lived through the 1930s once—I don’t want to go back.”

Chants for a general strike were popular on the march. Mark Serwotka, general secretary of the PCS union, told Socialist Worker, “It’s clear from the attendance and mood today that this can build into the forthcoming strikes. There’s a mood to fight against the Tories’ austerity.”

And despite Tory attempts to divide workers, private sector workers came out in force. Mohammed, a Unite union member from Rotherham, south Yorkshire, was on his first protest.

He said, “I don’t work in the public sector, I am in the motor parts industry. But it’s important for the private sector to show unity. The cuts affect all of us.”

One further education student, Lewis Holden, is a Labour party member. He brought a placard reading, “I can’t believe it’s not Thatcher”. He said, “I didn’t want the Tories to feel welcome in Manchester.”

The Manchester demo showed the level of anger that can be released when the unions start to move. Now the battle will be to ensure this anger feeds into the 30 November strikes.

The day was rounded off with a Right to Work rally of over 350 people. Trade unionists and other activists talked about the need to unite the resistance to the Tories. Ian Allinson, Unite executive council member, called for support for workers in dispute at Fujitsu.

And Kevin Courtney, assistant general secretary of the NUT teachers’ union, talked about the successful coordinated strikes held on 30 June. “Thousands have joined the union and we now have hundreds of reps,” he said. “This is the real rebirth of our movement.” 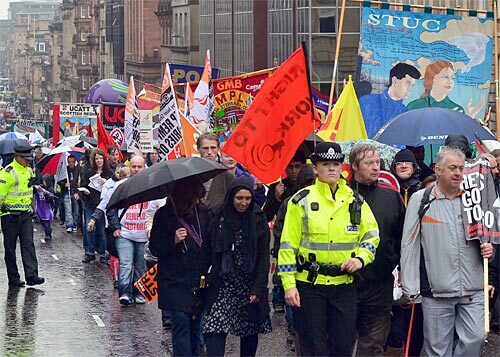