This article is over 13 years, 2 months old
Around 200 people protested in Manchester last Saturday against the killing in the Democratic Republic of Congo, and the deportation of Congolese asylum seekers.
By Mark Krantz and Thomas Haines-Doran
Downloading PDF. Please wait...
Tuesday 11 November 2008

Around 200 people protested in Manchester last Saturday against the killing in the Democratic Republic of Congo, and the deportation of Congolese asylum seekers.

Protesters, including many from the Congolese community, made clear that the reason for the fighting, which has claimed over five million lives, is Western interests in the country’s abundant natural resources. Western companies, supported by their governments, expropriate uranium, copper, gold and coltan —a heat resistant substance used in mobile phones and laptops. Meanwhile the Congolese people suffer from horrific poverty and malnutrition.

At a rally outside the BBC a spokesperson from the Congo Support Group explained what lies behind the upsurge in killing, saying, “It is all about the Western multinationals who are after out mineral resources, especially coltan. People don’t have mobile phones in my country. We don’t have electricity at night.

“In the Congo we don’t have proper roads but there are massive resources. There is a squabble over control of these with the multinationals prepared to deal with any one. We do not want the Balkanisation of our country with foreign interests backing different warlords marking out a stake.”

After seeing the horror in the Congo, campaigners against deportation should draw fresh confidence in their fights to gain refuge here in Britain. 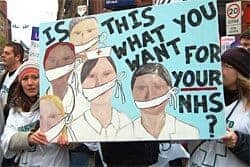 On the march to defend sacked trade unionist Karen Reissmann

Activists build networks of resistance across the country