Manjeet is a refugee currently living in Manchester who has had to use a wheelchair since she was eight.

The UK Border Agency reconsidered her case earlier this year—but has refused her asylum once again. Manjeet told Socialist Worker, “They say they are cutting my support on the grounds that I have no outstanding appeals.

“But I do. I’ve filed at the court of appeal for a judicial review. “I’ve lived here since April 2011. This is my home now. I know people and I have friends.

“I’m in a wheelchair. I don’t know where they think I’m supposed to go. “We are meeting this week to decide what to do.” 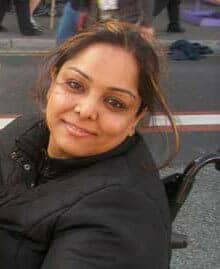 The Manjeet Must Stay campaign, organised through the refugee organisation Rapar, stopped her from being evicted in 2011.

“They put a picket line outside where I live, and it got a lot of publicity,” she said. “Then the Home Office decided I was eligible for Section 4 emergency support.

“It’s those at the top that make the rules and they can decide how they’re interpreted.”

Manjeet received an unsigned letter from outsourcing giant Serco on Friday of last week saying she must vacate her home by Thursday.

Serco is one of the private firms that the Home Office pays to house asylum seekers.

It suggested she get in contact with organisations such as the Salvation Army or Red Cross.

“Serco can’t physically put me on the street this week,” said Manjeet. “They have to get a court order first and that will take time.”

Manjeet is originally from Afghanistan, but lived in India with her husband Amitt Bhatt, a journalist who campaigns for human rights and against government corruption.

She helped research and proofread Amitt’s book, Lies and Genocide of the Indian Government.

She fled to Britain a month after Amitt disappeared in 2011. Gangs of men looking for him had come into her house and beat her on two occasions.

Her asylum claim was fast-tracked, but then rejected. Manjeet said, “When my case was heard I explained how I’d been attacked. The judge said, ‘I don’t believe you’.

“The two appeal judges just said they agree with him. This wasn’t face to face it was just on paper.”

Amitt managed to reach Britain earlier this year and has also applied for asylum. “The judge says that because he was able to travel legally and get a visa it shows that he was not persecuted. The fact that he has had to flee as well confirms what I was saying.”

Manjeet has also been politically active while in Britain. She now chairs Rapar and has volunteered with the UK Disability Coalition. She has also campaigned with Disabled People Against Cuts. 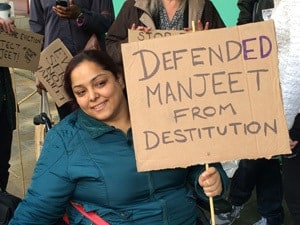