This article is over 8 years, 7 months old
By Ed Gostelow
Downloading PDF. Please wait...
Tuesday 21 May 2013

The cuts include the full closure of nearby Clapham fire station.

The high spirited demonstration marched up the middle of the High Street, union banners held high.

Swelled by groups of young people and led by a fire engine, the march headed to Lambeth Town Hall. A meeting was taking place there with London Assembly members, councillors and fire chiefs.

Some Lib Dems have suggested raising council tax to avoid the cuts.

There is a sense that both the Lib Dems and Labour would accept partial cuts as a victory.

Union members and activists rallied atop a fire engine before the meeting began. They were clear that Londoners must fight every cut or closure—because once a station is sold off it is gone for good. 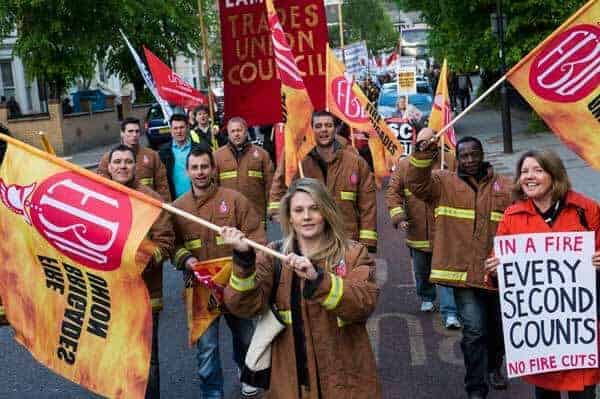 Firefighters back a national strike ballot over pensions