March says no to new runway

This article is over 18 years, 7 months old
SOME 500 people marched against plans for a third runway at London's Heathrow airport last Saturday. A third runway at Heathrow would require the demolition of hundreds of homes, local schools and churches, destroying two village communities.
Downloading PDF. Please wait...
Saturday 14 June 2003

SOME 500 people marched against plans for a third runway at London’s Heathrow airport last Saturday. A third runway at Heathrow would require the demolition of hundreds of homes, local schools and churches, destroying two village communities.

The protest had a lively carnival atmosphere, with plenty of placards and chanting.
Simon Basketter

Group 4 should be in the dock

ONE OF the defendants on trial over last year’s fire at the Yarls Wood refugee centre run by Group 4 has had the case against him thrown out of court. Another defendant had all charges dropped.

But Klodjan Gaba had only a brief taste of victory last week. ‘Klodjan walked out of the dock only to be rearrested immediately and taken all the way up to Scotland to the Dungavel refugee detention centre,’ explained one campaigner.

The trial of the remaining seven defendants continues.

SOME 288,000 civil servants in the PCS union are voting in national executive elections. The Democracy slate of the socialist Left Unity group and the PCS Democrats is standing in an attempt to overturn the right wing Moderates group who have dominated the union.

The Left Unity website has resources and guidance for all PCS members who want to maximise the vote. Go to www.voteleftunity.org.uk

CIVIL SERVANTS in job centres and social security offices in east London have pledged a fight against threatened office closures which could see 173 jobs go. Local PCS union branch chair Oliur Rahman says, ‘Staff are extremely worried about the job cuts and the effect they will have on those who use local benefits and job centre offices.

‘Rather than providing a reduced service to the most needy members of the public the department should provide a properly staffed service.’

A HUNGER strike in Margate in Kent by 24 refugees ended on Sunday. A similar protest began in Dover on Monday where up to 50 people were refusing food. The protests are against Section 55 of the Asylum and Immigration Act, which withdraws all accommodation and food from people if they fail to claim within a certain time after entering Britain.

Kamran from Azerbaijan told Socialist Worker, ‘My wife and I arrived a few weeks ago. We washed and rested before going to claim asylum. We were told we must be lying because we were too clean.’
Jon Flaig

Demonstrations against the Tory cuts 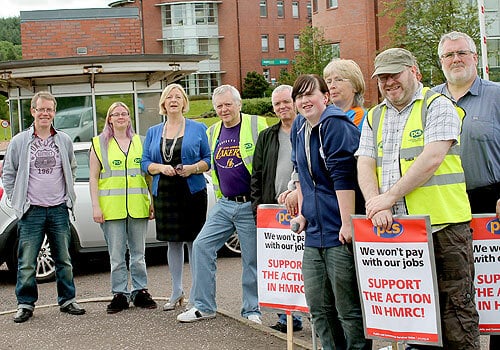 'If we had more staff here, we could hold the rich to account'