March, strike, occupy in the weeks ahead

This article is over 11 years, 8 months old
There are urgent steps to take—and vital arguments to be won—to create a movement powerful enough to defeat the Tories’ cuts onslaught.
Downloading PDF. Please wait...
Tuesday 19 October 2010

There are urgent steps to take—and vital arguments to be won—to create a movement powerful enough to defeat the Tories’ cuts onslaught.

Here are some crucial tasks in the days and weeks ahead.

There were protests against Osborne’s cuts planned for Wednesday and Saturday of this week in towns and cities across Britain.

Some of the biggest are set to be on Saturday in Edinburgh, Belfast, Sheffield and London.

Thousands of workers and campaigners are expected to march.

The larger the delegations from workplaces, colleges and communities, the greater the confidence will be to resist the cuts afterwards.

Coming after the 7,000 strong Right to Work demonstration at the Tory Party conference in Birmingham earlier this month, this week’s protests can be the next step in building a movement of resistance to stop the Tory and Lib Dem onslaught.

We need to fight for every job and service under attack

When any job cuts are announced workers need to move quickly to seize on the anger and launch a campaign of resistance.

Swiftly-called and properly built union meetings can draw in far greater numbers than the existing union activists, make workers feel a collective strength and allow a debate on which strategy is best.

Delay can be fatal in undermining confidence that job losses can be fought.

Mass meetings can be a springboard for calling ballots for strike action and a programme of protests to build the mood for a fight. In some cases, it may be possible to get immediate walkouts.

We need to argue for unity and solidarity

The Tories are trying to push through their cuts by using divide and rule tactics like racism. Everyone needs to combat this by building unity.

That’s one reason why the anti-racist demonstration on

6 November is part of the fight against the cuts and important for everyone.

The Tories and their friends in the press have also launched vicious attacks on the unemployed and those claiming incapacity benefits.

They want to divert anger away from the bosses and bankers who caused the crisis and towards black and Asian people, immigrants and those claiming benefits.

But unemployment is a result of the failure of the system to provide work, not “laziness” or “generous” benefits.

Pushing those on pitiful benefits further into poverty will not create a single new job. Instead it will foster a climate of fear hanging over every worker and weaken the fightback.

The unions need to be at the forefront of defending attacks on welfare benefits.

Firefighters in London and London Underground workers have both called strikes. BBC workers across Britain could soon be on strike over attacks on their pensions.

A victory for any group of workers will strengthen the argument for a fightback in every union and workplace.

We need to make sure the case for any strike is heard in every workplace, that we take up strike collections and visit picket lines to show support.

Anti-cuts groups have been launched in many areas to bring together workers and those who rely on the vital services they provide.

Anger at the consequences of the cuts will grow and every area needs to call anti-cuts meetings to develop a programme of protests, lobbies and marches to challenge cuts.

Every effort should be made to draw in trade union branches, community groups and Labour Party members, including councillors willing to oppose cuts.

This will increase the breadth of support the anti-cuts movement has, making it easier to build mass opposition.

Build the Right to Work campaign

The Right to Work campaign can help coordinate a national network of resistance.

Every area needs a Right to Work group that can raise crucial issues such as how we deal with the anti-trade union laws, build solidarity with strikes or fight for solidarity with migrant workers.

The new Right to Work pamphlet on defending services and busting Tory myths about cuts is a good basis for a meeting in the wake of the cuts this week.

Last month’s TUC conference passed support for coordinated action. But many trade union leaders are moving too cautiously and too slowly.

We need to pass motions and take the argument into the unions at every level for their words to be turned into action.

There needs to be a sustained campaign for occupations and a general strike to stop the Tories. This won’t happen overnight—but it can become a real possibility in the months ahead.

To order Right to Work pamphlets go to www.righttowork.org.uk

The cuts this week flow from a capitalist system that produces crisis and poverty.

The recession is not an “accident”—it comes from the way the system prioritises profit and is geared towards making more and more money for those who own and control the factories, offices and land.

To challenge these priorities, we ultimately have to get rid of this rotten system that pushes millions into poverty to protect the power and profits of the rich.

There is vast wealth across the planet that could meet the needs of every person. Yet capitalism constantly plunges us into misery, war and environmental disaster while a handful see their wealth grow—whether boom or bust.

We need to fight to take over the running of the economy ourselves and create a society where need, not profit, determines how it is organised. 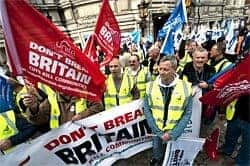 Thousands take to the streets against austerity 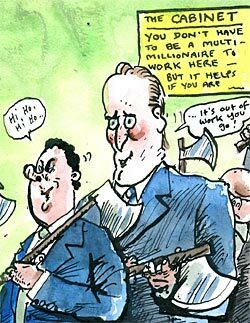