This article is over 12 years, 9 months old
Around 200 people gathered outside the Bank of England at lunchtime today to march to Bethnal Green police station to protest at the police tactics on the G20 demonstrations and the media coverage of the protests.
By Jake Smith
Downloading PDF. Please wait...
Saturday 04 April 2009

Around 200 people gathered outside the Bank of England at lunchtime today to march to Bethnal Green police station to protest at the police tactics on the G20 demonstrations and the media coverage of the protests.

The demonstration was called after the tragic death of Ian Tomlinson inside a police cordon near the Bank of England on Wednesday.

Many protesters and observers have also condemned police tactics such as “kettling” where protesters are penned in by a tight police cordon, cramped tightly together for hours without access to water or toilets.

Demonstrators on the march chanted, “Brutality in our nation, we demand an investigation,” and “It’s our right to demonstration, no more violence from the state,” along with “Met police what do you say? How many skulls have you cracked today?”

Joao, a university student and care worker in east London told Socialist Worker, “I am here to demand an independent inquiry. That is the main issue. I am also concerned with the social problems within this capitalist system where profit comes first and people come after.”

Joao said that he had attended the Stop the War demonstration last Wednesday outside the US embassy, and later joined the protests outside the Bank of England where he was surrounded and penned in by police in what was supposed to be a peaceful demonstration.

Health worker Ofa described how she’d witnessed the police eviction of a convergence space. “It was very intimidating,” she said. Ofa said that the convergence space had been “a very peaceful place where like minded activists came to sleep and eat”. 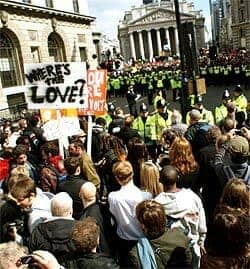 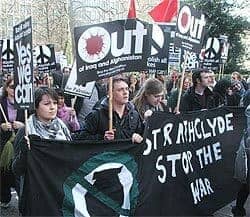