Days after MPs voted on the Tories’ energy bill, 450 people marched through central London to demand action on climate change.

The march was called by the Campaign Against Climate Change. Its coordinator Phil Thornhill pointed to the rapid loss of Arctic ice this year.

“Ten years ago it was common to hear that we wouldn’t see an ice-free Arctic until the end of the century,” he said. “But it’s happening now—and the extreme weather we’ve been getting is a glimpse of what that can mean.”

The protest assembled in Grosvenor Square between the US embassy and the Canadian high commission. Their governments have been two of the biggest obstacles to a binding international agreement to lower emissions. Protesters built a mock pipeline to link the two buildings.

New pipelines could bring oil from Canada’s tar sands to a global market, tripling the size of what is already the world’s biggest industrial project. Tar sands oil releases more emissions than conventional oil, and its extraction is immensely destructive to Canada’s ancient forests.

But Jess Worth of the UK Tar Sands Network brought good news from across the Atlantic. “In the past few weeks there has been rolling direct action against the KeystoneXL pipeline in Texas,” she said.

“And in British Colombia every one of the 200 indigenous First Nations whose land the Enfield Northern Gateway pipeline would pass through has united against it. Because of this direct action the price of tar sands oil has dropped.” 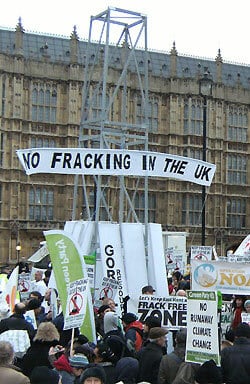 A number of local campaigns against fracking—hydraulic fracturing for shale gas—sent delegations to the march.

Fracking has been linked to earthquakes and toxic contamination of water supplies. Activists built a mock fracking rig outside parliament to highlight the issue.

“There could be 800 wells in our area alone,” Anne Fielding from Lytham St Anne’s in Lancashire told Socialist Worker.

“We’re concerned about the impact it’ll have, not just locally but on the climate. They should put that money into renewables instead—it’s one of the windiest places in Britain.”

The climate bill has attracted headlines for its support for renewables. But its category of “low carbon” energy includes not just gas but nuclear too. A group of Japanese Against Nuclear protesters on the march warned of the dangers that would bring.

“Where there’s an accident the pro-nuclear lobby try to cover up how bad it is,” said Satsuki. “At Fukushima they just changed the definition of what ‘safe levels’ were. Now those Japanese companies are trying to export their reactors to Britain. We’re trying to stop them here and across the world.”

What support there is for renewables in the Tory energy bill comes with a sting in the tail—the subsidy will come out of energy bills.

There was applause for left wing Labour MP John McDonnell when he said, “Instead of putting the cost onto private energy companies, the bill puts the cost on ordinary people.

“These are the same energy companies that are ripping us off with our gas bills. We will only defeat them if we are mobilised—in planning, in politics and in direct action.” 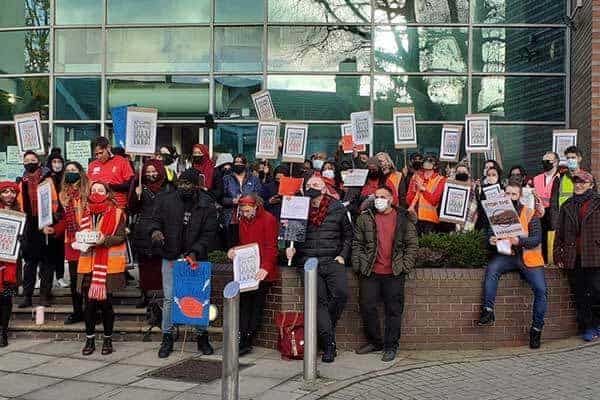 A lesson in not weighting