This article is over 12 years, 6 months old
Can the left unite? Should we deny the Nazi BNP free speech? How deep is this economic crisis?
Downloading PDF. Please wait...
Tuesday 07 July 2009

Can the left unite? Should we deny the Nazi BNP free speech? How deep is this economic crisis?

These and hundreds of other questions were pored over in the five days of debate and discussion which made up Marxism 2009 in central London, which ended on Monday.

A big proportion of those attending the festival, hosted by the Socialist Workers Party, were there for the first time.

One was Reg Ahmed from Essex. He said, “I think it’s a very good event, tackling a whole range of different issues.

“I am really surprised at how well organised it is. I thought it would be chaotic and hectic. I went to the meeting on Where Next for the Left? which was an important debate.

“We need a credible alternative to the centre-right that can encompass a broad range of opinions. It has to appeal to people who have different views.

“It’s good that this is being discussed by such large numbers and that all the different elements are here.”

Over 4,500 attended this year’s Marxism. They heard talks on subjects from the Great Miners’ Strike to Charles Darwin. They spilled out of the meeting rooms to keep the debate going in the sunshine on the grass and balconies. Debate went on into the evening in the cafe areas and bars.

Adam Misrahi from Walthamstow in east London, came with a group of friends. He said, “Marxism is an incredibly energising event for those on the left.

“I think there should be another event just as stimulating, but more accessible for those who don’t already know the theory.

“Many people feel that socialism is dead and that needs to be challenged.”

Liz Taylor, a member of the PCS civil service workers’ union in Cardiff, said, “This is my second time at Marxism and I have really enjoyed being more involved this year. I helped out with the stalls and the creche.

“It made me feel that I was part of the process.

“I really enjoyed the meeting about where next for the class struggle, with a speaker from the victorious fight at Visteon. It gave me a feeling of what you can do if you fight back.

“We are facing attacks in my department and the meeting let me know that there are other people out there facing similar problems and fighting back.”

One of the liveliest debates concerned how to combat the BNP. Many people wanted to understand why the SWP and other anti-fascists argued for no platform for fascists like the BNP.

From the platform and the floor people explained how fascism used democracy to clamber to power only to destroy all democracy.

Issues like this were raised and debated in one meeting after another.

Another striking feature of the festival was the sheer number of young people in attendance, particularly students.

Amreet has just qualified in medicine at Edinburgh University. It was her first time at Marxism. “There’s a lot of information and ideas to take in,” she said.

“I went to the meetings on Pakistan and Afghanistan and was surprised at how little I knew before. I learned a lot. I’ve also seen some inspirational speakers from around the world.

“I got a lot out of the meetings on an introduction to Marx’s Capital. I hope to read more about this.”

Lucky, a student at Glasgow university, said, “The best meeting I’ve been to was the one on the Spanish Civil War. It was a very passionate talk with a great discussion.

“The contributions make a real difference to the meetings. I think its good to see people getting up and sharing experiences and ideas.

“One of the good things about the event is getting to talk to so many activists – its more than just the meetings, its also the discussions in between.” 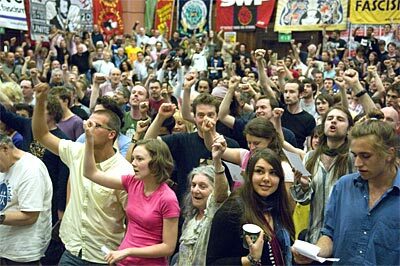