This year’s Marxism festival in central London took place at a time of escalating struggle against the Tories.

Over 2,600 people attended the event, organised by the Socialist Workers Party (SWP).

Some 166 meetings took place as well as film screenings and other cultural events.

Marxism 2014 began on the day of a 1.4 million-strong public sector strike. Striking workers were welcomed with cheers from the audience at the opening rally on Thursday of last week.

Trade unionists discussed how to take the fight forward throughout Marxism.

Unison union member Karen Reissmann introduced a session on the bureaucracy and the rank and file in trade unions.

She said there is pressure from below on union leaders “but it isn’t a confident pressure”.

Workers discussed how to increase confidence and develop organisation independent of union officials.

Other meetings took a debate format.

People from the floor discussed whether a vote for independence would break working class unity.

Two activists from Doncaster, South Yorkshire, urged everyone to build a demonstration in their town outside Ukip’s national conference on 27 September.

John Pilger, Darcus Howe and Gareth Peirce introduced a meeting to remember Paul Foot, who died ten years ago. Paul was an investigative journalist and former editor of Socialist Worker.

A series of meetings explored the global impact of the crisis.

Greek socialists Maria Styllou and Panos Garganas argued that a high level of workers’ struggle had pulled Greek politics to the left.

But they warned that the Syriza party, once a radical left coalition, had moved towards the centre as it prepared for government.

There were debates on key elements of Marxist theory including Marxism and feminism, Leninism, human nature and the dialectic.

Other talks covered a wide range of topics including mental health, religion, art and psychoanalysis.

Can the Middle East be free?

Revolutionaries from across the Middle East spoke at Marxism.

Syrian revolutionary Joseph Daher described the state of the struggle there while Lebanese socialist Bassem Chit addressed the issue of sectarianism.

An extra meeting on how Palestine can be free was organised, introduced by John Rose and Wassim Wagdy.

The meeting broke out in chants when told it was being live streamed to Jehad Saftawy, a journalist in Gaza.

Jehad told Socialist Worker, “Meetings like this make us more strong because we feel that there is at least a little justice in this world to know that people care.” 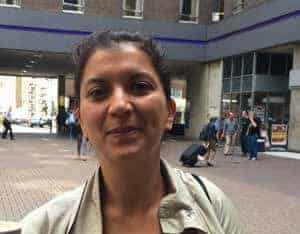