Mass meeting in Barnsley tells government to ‘Get Stuffed!’

This article is over 11 years, 7 months old
The biggest union meeting in Barnsley that anyone can remember delivered an uncompromising message to Barnsley council and the Con-Dem coalition on Tuesday.
Downloading PDF. Please wait...
Wednesday 24 November 2010

The biggest union meeting in Barnsley that anyone can remember delivered an uncompromising message to Barnsley council and the Con-Dem coalition on Tuesday.

Rejecting the proposed attack on council workers’ terms and conditions the 450 members at the mass meeting unanimously agreed to take industrial action if they were imposed.

The council management has proposed to cut pay by 5 percent, to abolish sick pay, and to abolish annual pay increments.

If these attacks were implemented on top of the national attacks on pension contributions and a two year pay freeze then a council worker on £20,000 would lose almost £4,000 a year – meaning an effective pay cut of 19 percent. This would be a permanent cut to wages and pension entitlements – and all this for no promise of no redundancies beyond the first year of a four year programme of cuts.

The mood of meeting was angry and determined. Speaker after speaker from the floor of the meeting demanded that Unison nationally provide a much stronger leadership in the campaign against the cuts.

They also passed a motion from the floor to support the call for industrial action if anyone is made compulsorily redundant. One steward explained that a group of workers who support adults with learning difficulties are so angry they are looking to take industrial action – a step they have never contemplated before.

Another member from highways explained how the cuts would have a much more devastating effect on low paid workers who would have to choose between paying their heating bill or putting food on the table – unlike senior managers who might have to chose not to eat out at a posh restaurant once or twice less a month if they lose 5 percent in wages.

The biggest applause came when one member suggested that management and the government should in no uncertain terms be told to “get stuffed” for their proposed cuts.

The meeting agreed to build a demonstration in Barnsley on 11 December and to pack coaches for the national TUC demonstration on 26 March. 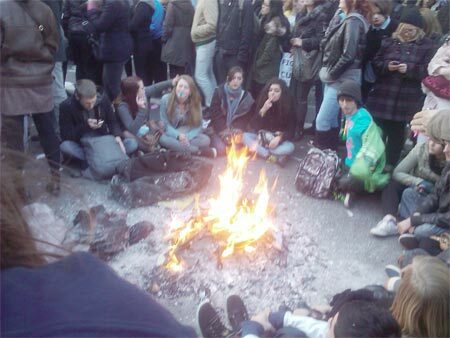