This article is over 11 years, 10 months old
Workers, anti-cuts campaigners and community activists have poured into mass meetings in the last week as anger grows against the Tory cuts agenda.
Downloading PDF. Please wait...
Friday 24 September 2010

Workers, anti-cuts campaigners and community activists have poured into mass meetings in the last week as anger grows against the Tory cuts agenda.

The numbers turning up for meetings are on the rise, reflecting the growing realisation of the impact of Tory cuts and a determination to resist them.

GP Kambiz Boomla told the room, “There are strong possibilities for a fightback—health will be a key issue, that’s why we’ll be encouraging as many GPs and health workers to come on the demonstration outside the Tory party conference on 3 October.”

Matt Wrack, general secretary of the Fire Brigade Union got a huge round of applause when he spoke about firefighters across London preparing for strike action.

Wrack said, “We’re told we’re all in it together, but some are doing better than others aren’t they? The bankers have got their bonuses back, the banks we bailed out are off the hook, and there has been a sustained attack to shift the blame of who caused the crisis onto public sector workers.

“We have to build a movement of the people who work in public services and those who use them. When the TUC calls the date for the demonstration in March, we have to work to make it huge and show the strength of our resistance. They say there is no alternative to the cuts, but we have to show them that we have an alternative.”

Labour veteran Tony Benn told the audience, “In every case of victory in our past, working people won because they stuck together. Solidarity is the greatest weapon at our disposal. We mustn’t allow the right wing press to divide us or weaken our resolve.”

Some 150 people packed into the Hackney Alliance to Defend Public Services meeting on Thursday.

Becky, a tube worker, spoke about the ongoing fight for jobs and safety on the London Underground and the importance of workers solidarity to their struggle.

Author and activist Michael Rosen told the meeting, “I’m very optimistic—as the system is so naked, it becomes clearer and clearer to all of us that the rich are stealing from the poor to get richer.”

He called for greater resistance and for people to join together to defeat the cuts, including coming on the protest outside the Tory Party conference on 3 October.

In Manchester forty people attended a Right To Work meeting to mobilise support for the 3 October demonstration in Birmingham.

A BBC worker who reported: “The people I work with are boiling with anger. The atmosphere has changed since our 90 percent vote for strike action was announced. They are coming for all of us over our pensions, but we are not ‘all in it together’, not when our boss Mark Thomson is on over £400,000 a year. We are already planning for the strike and I am pushing for a delegation to come to Birmingham with the BECTU union banner.”

Midwife Sarah Davies, from the campaign to Keep Salford Maternity Services, brought a delegation to the meeting and reported that the campaign had agreed to back the protest outside the Tory conference on 3 October. “Salford has one of the best performing maternity hospitals in England,” she said. “We think we can win the fight to keep it. Our fight to keep these services will prepare us for the bigger fights over cuts that are to come.”

Collette, a local community activist said, “The Black and Minority Ethnic Community is always at the bottom when it comes to provision. The cuts will effect us, and we need to get the message out that there is a fight back.”

Over 120 tickets have now been booked on the Manchester coaches to Birmingham.

The meetings reflect a growing mood for action against the cuts.

And momentum is growing for the protest outside the Tory conference. The Maltby branch of the National Union of Mineworkers has backed the protest and is bringing its banner on the march.

Over the past week activists have been campaigning outside workplaces and community events including student freshers’ fairs.

To get details of local transport visit www.righttowork.org.uk 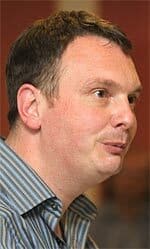 Sunday 3 October: take the battle to the Tories 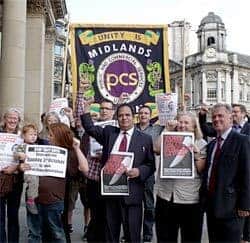 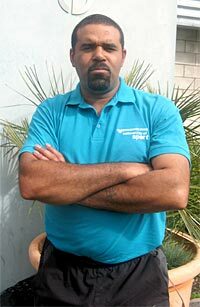