Tens of thousands of workers marched through Johannesburg from 9am this morning to show their resolve to continue striking until their demands are met.

Union branches across the country reported from mass meetings the “outright rejection” of the deal and workers call “for the strike to be intensified”.

The army is now running 61 hospitals as services grind to a halt.

Cosatu, the South African trade union federation, suspended a one-day general strike due to take place today so that unions could consult with their members on the revised offer.

But by Wednesday evening it was becoming clear that region after region had rejected it, leading Cosatu to announce that the prospect of a general strike is highly likely.

Workers in the metal industry, mines, municipal services, paper, chemicals and broadcasting have all reaffirmed their commitment to coming out on strike in solidarity with public sector workers.

Regional union reports on the progress of the strike are impressive. They are honest about the strengths and weaknesses of the strike—where picket lines need improving, where workplaces have been completely shut down and where there are gaps. But they also reflect the determination of workers to keep on fighting.

The Limpopo region reports that 70,000 marched to government offices at the end of last week in what they describe as the biggest march “since our democratic breakthrough”, referring to the fall of apartheid in 1994. They said that the turnout reflects “the anger of workers”.

In Kimberly some 2,000 workers gathered for a mass meeting to discuss the new offer—and rejected it.

In the Gauteng region (Johannesburg) 25 branches met, 16 completely rejected the deal while five were undecided and only four willing to accept.

The depth of solidarity for striking workers is reminiscent of that seen during the anti-apartheid struggle, going well beyond the trade union movement.

A letter of support from an Aids activist to striking worker says, “I fully put my weight behind Cosatu as they battle and struggle for the rights of the workers, the poverty stricken and exploited majority. The struggle for a dignified life continues.”

The United Congregational Church of Southern Africa has also issued a statement of support. It reads, “The gap between the top public service workers and those at the bottom is incredible and unethical. We hold the government answerable for being a poor and unjust employer.”

Workers’ determination to fight is fuelled by their struggle for survival and by the continued attacks on the strike by the government and media.

President Zuma has repeatedly attacked strikers and a government spokesperson said today that, “No nation can allow the sick to die.” But the unions argue that it is the government that is to blame for failing to improve the living standards of workers after 16 years.

Cosatu general secretary Zwelinzima Vavi attacked the leadership of the ruling African National Congress last weekend saying that the trade union movement “will not make a mistake again of voting into power our worst political butchers”.

Strikes spread in the private sector

More strikes have also broken out in the private sector as the public sector strikes continues.

Around 7,000 workers in the tyre industry walked out on Monday demanding an 11 percent wage increase and a one-year agreement.

The 40,000 motor industry workers who walked out on Wednesday are demanding a 15 percent increase and a minimum of R20 per hour for petrol pump attendants.

As a result of the strike in the car components sector, BMW and Volkswagen have temporarily suspended production at their plants in South Africa.

The National Union of Mineworkers is threatening to spread strike action across the country in order to win three disputes currently underway. They include 600 workers at Exarro Sands, 1,700 workers at Richards Bay Minerals and 8,000 workers at Northam Platinum.

Union spokesperson Bhekani Ngcobo described the employer as “shaking” as stocks were depleted.

The shop workers’ union Saccawu has given notice of its intention to call its 25,000 members out on strike over pay and bargaining agreements. Around 29 major retailers, the equivalent of Sainsbury’s and Marks and Spencers, are involved in the dispute. 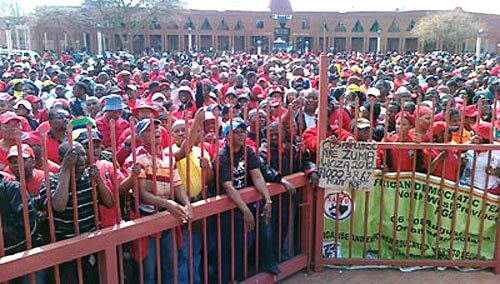 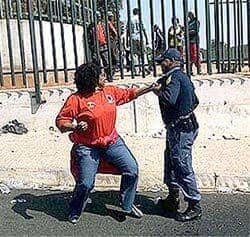 South Africa: The faultlines in the ANC’s alliance