Protesters marched from the town square to a rally in a field next to the hospital. Both the organisers and the police said 30,000 joined the rally.

Heather spoke for many of the hospital’s staff as she thanked people at the rally for their support. She said, “I’m not sure I can say this without crying, we’ve felt very lonely and unable to speak out for a long time.”

Earlier this month Mid Staffordshire became the first NHS Foundation Trust to be declared bankrupt. This came not long after the Francis inquiry into excess patient deaths at Stafford hospital, which published in February. 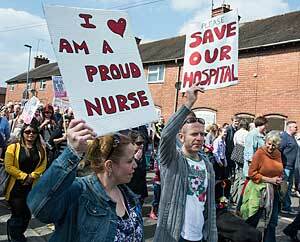 The deaths followed drastic staff cuts when NHS bosses planned to turn the hospital into a Foundation Trust. Staff complaints about the conditions and poor care were ignored.

Other staff told the rally of their pride at working for the hospital. A theatre nurse said, “I wouldn’t want my little son going anywhere else.”

Dozens of patients talked about the good treatment they had received. Many more had made placards saying the hospital had saved their lives.

The services under threat include A&E, maternity and children’s services. NHS bosses plan to downsize the hospital and bring in private health care companies.

If the plan goes ahead the nearest A&E will be in Stoke or Wolverhampton—30 minutes drive by ambulance.

Stephen Jones is president of North Staffs TUC and a health worker in the Unison union. He came from Stoke with his family and his Unison union flags.

He told Socialist Worker, “The government’s erosion of health care services makes it easier to privatise. A closure here will have a dramatic effect on Stoke hospital. Nobody wants it and it’ll only make services worse. They won’t plough more money into extra services there to meet demand.”

“Frontline” health workers from the hospital marched into the square in uniform behind their banner to loud applause. They had been told they were not to speak to the media.

Other hospital workers like Mike and Yvonne marched with their union flags. 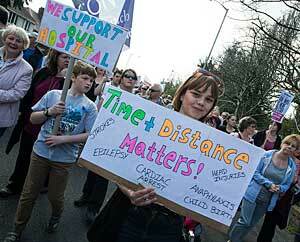 People are worried at the extra distances they will have to travel if local services are cut (Pic: Guy Smallman)

Yvonne told Socialist Worker, “Stafford hospital is being used as a guinea pig. The changes they make here they want to roll out to similar-sized hospitals across the country.”

Mike added, “morale was very low before and we hope the Francis Report can be a turning point. But this is privatisation in everything but name.”

The march was led by pensioner soldiers from the Stafford regiment and was backed by the local Tory MP.

Some people spoke angrily about some local GPs who support the downsizing plans. Mike said, “GPs can make more money if services go to private companies, It’s a gravy train.”

Unison steward Karen Reissmann came with other health workers from Bolton, Salford and Trafford mental health services with their union banner in solidarity.

She said, “The potential to stop the Tory cuts is here in this field but we need to co-ordinate all the Save our NHS campaigns across the country. And the unions have to take a firmer lead to defend services.” 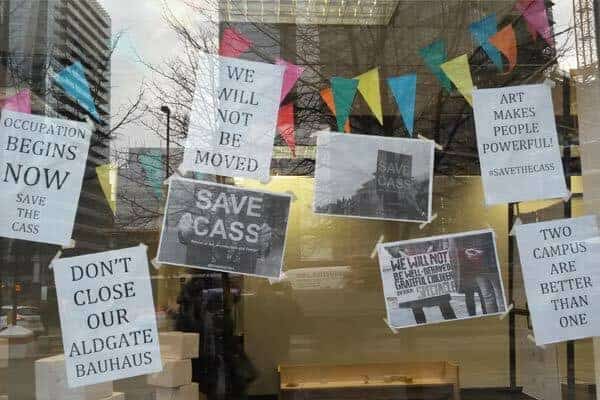 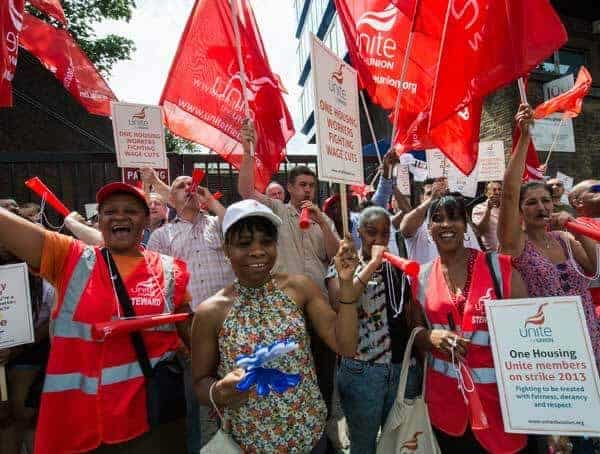 One Housing strike grows in strength and strength