This article is over 12 years, 0 months old
Members of the RMT transport union at the former Metronet company on London Underground have voted by over 90 percent to strike.
Downloading PDF. Please wait...
Tuesday 19 January 2010

Members of the RMT transport union at the former Metronet company on London Underground have voted by over 90 percent to strike.

Bosses want to force workers to do whatever shifts they demand.

The changes would mean workers having to do more weekend and anti-social shift work.

The ballot covered the 750 RMT members in the Signals Framework Agreement.

The privatised Metronet company, which carried out infrastucture work on most of the tube network, collapsed in 2007 and the work had to be taken back in-house.

The Tubelines company, which does the infrastucture work on the Piccadilly, Northern and Jubilee lines, is also in deep financial trouble.

These attacks come as London mayor Boris Johnson plans to make £5 billion of “savings” across Transport for London.

Bob Crow, the RMT general secretary, said, “This overwhelming vote for action has shown LUL management that if they think that they can ride roughshod over our terms and conditions then they need to think again. It’s their bully-boy management style which has forced us into this dispute and our members have sent out the clearest possible message that they are not prepared to be beaten into submission.

“LUL seem to be hell bent on confrontation by tearing up the Signals Framework Agreement and by unilaterally introducing new working practices which mean they can make people work what hours they like, when they like.

“On top of that, our members’ job security is being undermined by the handing over of work to external private contractors which could be done internally.

“Those are the issues at the heart of this dispute and RMT would expect management to take note of the angry and determined response of our members, reflected in this ballot result, and withdraw the attacks on procedures and working conditions.” 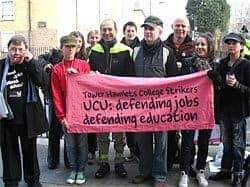 Reports on lecturers' strike across the country on Thursday 24 March