‘May the First be with you!’

‘May the First be with you!’

I AM a member of the Socialist Worker Student Society in Sheffield and would like to let people know what is happening here after the amazing scenes of protest in Seattle against the World Trade Organisation.

I recently attended a meeting of around 50 people, most of whom I’ve never met before. All were against capitalism and concerned about the effect it has on our world. All were keen to arrange a “carnival against capitalism” on 1 May with a band, street theatre and a real political message.

The solidarity of the group was brilliant. No one suggested that we buried our differences, but the consensus was that to make an impact we had to work together. I am part of the publicity group and am really looking forward to a big day of celebration of anti-capitalist feeling. As someone at the meeting suggested as a slogan, “May the First be with you!”

The time is ripe to organise

THE “TIME To Unionise” centre pages of Socialist Worker (15 January) were excellent. The experience in Harwich offers practical methods of unionising. The Harwich SWP branch was approached by people outraged at their conditions. We launched a Campaign for Union Rights. A high point was the union roadshow, which involved UNISON, the GMB, USDAW and the RMT. This had such an effect that even our local Blairite MP was stood with us in the town handing out leaflets (much to his discomfort).

An old people’s home was successfully unionised and the campaign has resulted in the rebirth of the Harwich Trade Union Council. At its first AGM for over five years it resolved to continue the unionisation drive. My own union, the GMB, reports its highest ever recruiting figures. In December last year over 90,000 people joined the union, with nearly 13,000 in London alone. We are faced with a great opportunity, and socialists need to be in and on the ground shaping militant trade unionism.

A recent BBC South East TV documentary highlighted Ford bosses’ collusion in racist victimisation of workers at the company’s Dagenham plant. An anti-racist shop steward and several workers gave good accounts of Ford’s racism. But the programme makers glaringly omitted any mention of last year’s anti-racist strikes at Dagenham around the Sukhjit Parma case. This was incredible, given that Ford’s global president came scuttling over to try and calm the anger among workers. Black and white workers struck unofficially over bosses’ treatment of Sukhjit. The BBC team had a preconceived view of a “white monoculture” prevalent in Dagenham.

Yes, racism exists locally, but there is a long tradition of integration and anti-racism in the area. Maybe the programme makers should have listened to local socialists. We spoke at length to the programme makers, giving background information and suggesting union stewards they could speak to. None of this was used. There is racism in Dagenham, and the biggest culprits are Ford bosses. But the workforce at the plant stands as a beacon of hope, where socialist politics and anti-racism are welcome as part of the fight against those bosses.

WORKERS AT at the Vyborgskii paper plant in St Petersburg, Russia, are ending their protest after winning concessions from the plant’s owner, UK-based ALCEM. Union representative Pavel Privalov told reporters that ALCEM has pledged to preserve all jobs and pay wages of not less than 2,500 roubles (55) a month. In return, workers will allow the new owners to take over the plant. Last October justice ministry troops stormed the plant and opened fire on workers who had barricaded themselves in the administration building to prevent the mill’s foreign owners from assuming control. The example shows that even in the face of such methods workers can make gains by standing together.

IF YOU missed Jonathan Dimbleby’s documentary about the Kosovo war shown on ITV recently, try to find someone who taped it. It was a complete vindication of the anti-war movement. Dimbleby pointed out that the ethnic cleansing of the Kosovan Albanians intensified massively as a result of the bombing. The war created a humanitarian catastrophe rather than halting one. It has been followed by mass ethnic cleansing of the Serb and Roma minorities, which NATO governments and the media are ignoring.

He visited a major hospital and asked why no Serbs were being treated on the wards. The answer was that any hospital worker giving them care would be intimidated by KLA supporters. The programme also argued that the war was provoked by the US diktat at the Rambouillet talks. The last minute US insistence at Rambouillet on NATO troops being able to roam around the whole of Yugoslavia was dropped from the final deal after the bombing. The fact that these points are made by such a mainstream establishment figure as Dimbleby is important. It will make uncomfortable viewing for those who accepted NATO’s lies.

A NEW word has entered the English language, according to the Financial Times. It is “nairu”-the non-accelerating inflation rate of unemployment. The theory is that if unemployment falls below a certain level employers will have to pay higher wages. This is a bad thing from the bosses’ point of view. The nairu is the level of unemployment that maximises profits.

The nairu is thought to be about a million for Britain. The government, the Bank of England and the bosses are trying to ensure about a million people will be unemployed. They do this through interest rates. Unelected Bank of England governor Eddie George has decreed the nairu is in danger of being crossed, so rates go up. Every time you see someone unemployed or a factory close, remember it is a conscious policy by a group of upper class thugs.

Sites of death can be changed

NEARLY 100 building workers were killed on sites in Britain last year-two a week. Behind this lies the decline of health and safety officers and union organisation. Almost every year of the last decade has seen the number of deaths rise. The contrast with Australia is stark. The numbers killed on sites there are a tiny fraction of British figures, and declining. Why? Union organisation. In Melbourne now whenever there is a fatality all sites across the city stop work until inspectors arrive. This sends a clear message to management.

Signs of the changing mood

CAMDEN COUNCIL in London last week became the first in the country to reject Blair’s new mayor and cabinet structure for local councils. This followed popular opposition to New Labour’s plan, with public meetings across the borough. It follows other defeats for would-be New Labour “modernisers” in Camden, first over housing privatisation and then library closures.

The victories are having a more general effect in raising people’s confidence to fight. Last week there was a well attended meeting opposing the closure of an old people’s home. My tenants association is relaunching its campaign to get a youth club opened. The credibility of collective action to win change is being rebuilt. New Labour support is starting to haemorrhage and socialists are gaining a real hearing.

THANKS for sending me Socialist Worker and Socialist Review, which I have received this afternoon. I am interested in subscribing, but may need some help with the cost. I’m a college student, and one of your pounds is now worth 9,000 of our rupiah, because of the crisis hitting our country. After a quick non-stop reading of your material I really love what I’ve read and think I can spread your ideas in my neighbourhood and local scene.

I AM writing to highlight a miscarriage of justice that happened to me in November 1996. I was on remand at Cardiff prison when another inmate attacked two prison officers. I was accused of inciting the inmate. I did not and there was no real evidence against me. But in a court case which I found very unsatisfactory I was found guilty and sentenced to 21 years. I would like help from your readers to discuss the details of my case and to take up the miscarriage of justice. 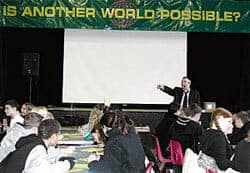 Just imagine if every day was like this one