Media workers call for the truth

This article is over 20 years, 9 months old
UP TO 800 people packed into a marvellous Media Workers Against the War rally in central London three days before Saturday’s protest.
Downloading PDF. Please wait...
Saturday 20 October 2001

UP TO 800 people packed into a marvellous Media Workers Against the War rally in central London three days before Saturday’s protest.

The most striking feature of the meeting was the number of young media workers there, eager to hear the arguments and build a movement to stop the war.

Workers from newspapers and magazines, from TV and radio, came together-all determined to challenge the pro-war lies being pumped out by those in control of Britain’s media.

Some were veterans of the Media Workers Against the War which had been launched ten years ago at the time of the Gulf War.

Former Daily Express editor Rosie Boycott was the first speaker at Wednesday’s meeting. She was among the founders of the Spare Rib feminist magazine in the 1970s:

‘Afghanistan is a land of eight million starving people, and the US and British governments are bombing them. What on earth do they think they are going to achieve? Blair says we are going to war. Well, I am not going to war. Blair also says he is doing it for Afghan women under the Taliban. How dare he say that, given the way women are treated in his ally Saudi Arabia? It’s up to all of us to try and stop this war.’

National Union of Journalists general secretary John Foster spoke at the meeting and argued, ‘The bombing is not being done in my name or that of British working people.’

John Pilger won a rousing reception when he spoke. He argued that ‘the tragedy of 11 September is being exploited by Bush and Blair to further their imperial aims’.

And he also urged that ‘journalists and broadcasters who are here should be doing something about the war in their professional lives’.

Paul Foot was the final platform speaker. Pro-war commentators, he said, often asked, ‘What would you do to tackle terrorism?’

Paul responded to the question with a few suggestions for Bush and Blair: ‘Stop subsidising the government of Israel, and stop shaking the bloodstained hand of Ariel Sharon.

‘Tell your ally Putin to stop slaughtering the people of Chechnya. Stop cosying up to the dictatorships in Saudi Arabia and Pakistan. And close the gap between rich and poor which is the root cause of the problem.’

Media Workers Against the War has already begun to build at a local level.

At the BBC in West London there has been a 50-strong lunchtime meeting. One BBC worker explained, ‘I went along to the launch meeting of Media Workers Against the War. I met two other BBC workers there, and they got on board. We distributed 1,000 leaflets and people turned up. Many were from the news departments.’

The anti-war movement needs to be built in every workplace, every college, every town and every estate.

And everyone should start now to build the national demonstration on Sunday 18 November.

A message to all our readers 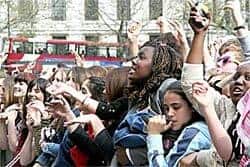