This article is over 11 years, 11 months old
More than 100 media workers packed into a meeting in London on Tuesday to launch the campaign Expose the BNP (British National Party).
By Viv Smith
Downloading PDF. Please wait...
Thursday 25 February 2010

More than 100 media workers packed into a meeting in London on Tuesday to launch the campaign Expose the BNP (British National Party).

Dave Crouch, one of the founders of the campaign, said it aimed to, “harness the skills and energy of media workers” so that they can expose the true fascist nature of the BNP particularly in the run up to the general election.

Mehdi Hasan, editor of the New Statesman, criticised the “piss-poor” way in which the media dealt with the BNP saying that it is vital for the media to expose and properly investigate the BNP. “Even the most ignorant people can see that the BNP is not a normal political party”, he said.

Speakers condemned the appearance of Nick Griffin on Question Time. Michelle Stanistreet, deputy general secretary of the National Union of Journalists, described it as a “political pantomime” that did nothing to expose the BNP.

Labour MP, Peter Hain, also spoke at the meeting. He said, “never again should the views of the BNP go unquestioned and unchallenged” and applauded those who stood up to the BNP and English Defence League (EDL) when they marched in Stoke last month.

There was an underlying debate in the meeting about the difference between exposing the BNP, and refusing to work or participate in any media that will give them publicity.

Alan Gibson, chair of the London Magazine branch of the NUJ, said it is vital for journalists to unite and work out how to tackle covering the BNP in the media. But he went on to say that activists, like himself, “will refuse to cover the Nazis in any way” and that it was vital to work together as trade unionists to protect media workers who take that position.

Weyman Bennett from Unite Against Fascism finished the meeting arguing, “Jews in Germany weren’t killed because they were inarticulate or insufficiently armed to conduct a debate against Hitler and the fascists.”

He said while it was important for media workers to come together to campaign for proper reporting of the BNP, it was also crucial to “unite to drive them from the streets and political life altogether”.

The meeting was sponsored by the national executive committees of the media workers NUJ and BECTU unions.

Expose will be holding a follow-up activist meeting on Wednesday 3 March at the National Union of Journalists office, 308-312 Gray’s Inn Road, WC1X 8DP. For information go to www.exposethebnp.com

Bolton: Why we must stop this EDL demonstration

Barking: The battle to stop the BNP's Nick Griffin 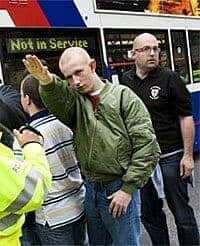 Students mobilising against the EDL