In less than four months we have a chance to be rid of Britain’s two Nazi MEPs when they defend their European Parliament seats.

Anti-fascists will be campaigning on and around Holocaust Memorial Day on 27 January to get them out.

In the North West fascist Nick Griffin of the British National Party (BNP) only needs around 7 percent of the vote to keep his seat.

Unite Against Fascism (UAF)launched the Griffin Must Go campaign in 2011.

Mark Krantz, a UAF activist in Manchester, told Socialist Worker, “It’s essential that we are part of the struggle against the Nazis.

“My family lived in the shadow of the Holocaust, as all Jewish families did after the Second World War.

“I would see some relatives who had a tattoo on their arm. It was an identification number—they had survived Nazi concentration camps. That sight made me a lifelong anti-racist.”

UAF was set to hold a memorial event, “Never Again” in Barrow and South Cumbria on Friday of this week.

It has organised leafleting against Griffin across the North West on Saturday and Sunday.

And on Monday the Transport For Greater Manchester Unison union branch will hold a meeting about a recent UAF visit to the Nazi Auschwitz camp in Poland.

Mark said we can never be complacent around fascism. “In my aunt’s house there was a room in which lived a woman who I never saw,” he said.

“I found out she was a survivor of the ghetto, and was hiding bread whenever she got any in case it happened again.”

The Nazis created ghettos In many central and European cities where Jewish people were crowded together.

They were, trapped with little food or fuel, waiting to be transported to death to camps like Auschwitz.

Mark said, “Despite the terrible odds against them there were inspirational struggles in many ghettos against the Nazis.

“In much less hostile circumstances we have to continue that struggle today.

“The campaign to get Griffin out is important for us all.” 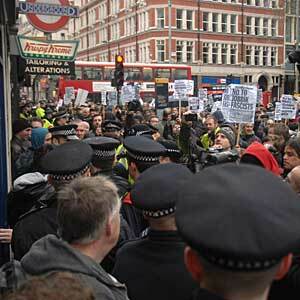