This article is over 20 years, 4 months old
'WE STRUCK without a ballot. And we won in five hours-not the five weeks it would have taken if we'd stuck with the anti-union laws.' That is how one firefighter on Merseyside sums up the lessons of a magnificent walkout on Monday.
Downloading PDF. Please wait...
Saturday 15 September 2001

‘WE STRUCK without a ballot. And we won in five hours-not the five weeks it would have taken if we’d stuck with the anti-union laws.’ That is how one firefighter on Merseyside sums up the lessons of a magnificent walkout on Monday.

It was the first time a whole brigade has struck unofficially since 1977. It comes after a series of official eight-day strikes this summer, which knocked back attempts by the chief officer in Merseyside, Malcolm Saunders, to break the Fire Brigades Union.

But Saunders survived that battle and since then has launched a reign of intimidation against union members and activists. On Monday a firefighter on the red watch at Toxteth station was suspended for his role in producing a website during the dispute which lampooned the management’s own.

The whole watch walked out. Within hours firefighters and control room staff across Merseyside were out as the strike spread by telephone. ‘For the second time in a couple of months Saunders is chief officer of fuck all,’ said one firefighter.

Management immediately looked to negotiate with brigade and regional union officials. Some 200 firefighters and control room staff gathered outside the negotiations. Saunders buckled. Management dropped the suspension, agreeing to a union demand that the firefighter is instead put on special leave.

There is now to be a meeting between FBU general secretary Andy Gilchrist and the national employers’ representative to decide whether there are any grounds for disciplinary action.

The union has already made clear that there is no case to answer. This is a humiliating retreat for Saunders. But he is pressing ahead with attempts to bully the union.

One regional official faces disciplinary charges, alongside many other members. ‘We showed the power to get rid of Saunders,’ says one Merseyside firefighter. ‘What we won is impressive. The action we took was even more impressive. People know we could have stopped the green watch [Monday’s night shift] and sustained the strike. That would have won even more-like an end to all the disciplinary charges agaist our members.’

The walkout in Merseyside this week marks a watershed. It showed that firefighters can take unofficial action and win.

More and more people in the FBU, at all levels, are coming to realise that national action is needed to deal with not only Saunders but a host of attacks taking place in different brigades often under government schemes such as ‘Best Value’.

There is nervousness at national level about defying the anti-union laws. The rank and file determination in Merseyside needs to be organised and linked with activists across Britain to provide a decisive lead in the battles to come. 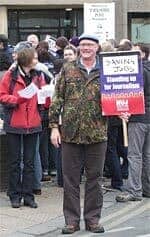