Merseyside unites in the wake of Anthony Walker’s murder

This article is over 16 years, 5 months old
People from across Merseyside gathered to convey their sympathy and support to the family of Anthony Walker, who was murdered by racist thugs on Friday 29 July, at two public events held in Liverpool last week.
By Madeline Heneghan
Downloading PDF. Please wait...
Saturday 13 August 2005

People from across Merseyside gathered to convey their sympathy and support to the family of Anthony Walker, who was murdered by racist thugs on Friday 29 July, at two public events held in Liverpool last week.

The first, a vigil organised by Unite Against Fascism, was held on the Tuesday following Anthony’s death and attended by about 1,000 people.

People really rallied round to help build the event. The PCS union provided the stewarding and PA system, Mersysound provided sound engineers, Liverpool Black Sisters leafleted the Toxteth area and other local organisations helped to spread the word. The vigil was attended by about 20 family and close friends.

An array of speakers lined up to pay their respects and to call for justice for Anthony’s family. These included Dominique Walker, Anthony’s sister; Eddie O’Hara, MP for Knowsley South; Paul O’ Connor from the PCS and Weyman Bennett from Unite.

The event was a real multicultural affair, with six trade union banners, and attendees from all parts of Merseyside. It felt as if people were really pulling together to send out a very strong message that racism will not be tolerated on Merseyside.

The second event was a candlelit procession on Friday of last week, starting at a church close to Anthony’s home. One of Anthony’s favourite songs, I Try by Talib Kweli, was played to the congregation while pictures of Anthony from a toddler to a teenager were projected on to the screen at the front of the church.

The family led the procession to McGoldrick Park where the attack took place. They were followed by around 4,000 people holding candles.

The park was packed out with mourners who listened to local clergy and Anthony’s family lead prayers and appeal to the youth.

Anthony’s mother Gee told the crowd, “You young people—don’t let this happen again. Let his life bring change to you. Please don’t let his death be in vain.” This event was made up largely of people from the Huyton area.

Anti-racist campaigners, black and white, from across Merseyside are now determined to keep their activity going — particularly to combat the efforts of the far right.

We found out that the fascist British National Party (BNP) was planning a meeting in the Walton area of Liverpool this week — but we were able to prevent that meeting from happening.

A woman in the Dingle area of Toxteth was stabbed in the eye and racially abused during a burglary on her home in the week following Anthony’s death.

It is crucial that black and white people continue to work together to prevent the BNP or any other racist scum from organising or spreading their filthy propaganda. 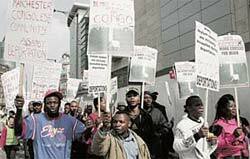 Family left with £50 a month