“NEVER BEFORE has a party had so much command over the House of Commons yet so little over the electorate. That appears to be the stark contrast that now faces British politics over the next four or five years.”

That was the conclusion of elections expert John Curtice, writing in the Independent and Sunday Telegraph at the weekend. He continued, “No government has secured office with the active support of so few voters since the first (minority) Labour government gained office in 1924.” The fall in the number of people voting in last Thursday’s election is staggering.

Just 59 percent of those who could vote actually did so. That is 12 percent lower than in 1997, which up to then held the record for the lowest turnout at a general election since the Second World War. You have to go back to 1918, when millions of men could not vote because they were still conscripted in the army in Europe, to find a lower turnout.

THE COLLAPSE in the numbers voting means New Labour was elected with the support of just one in four eligible voters. Foreign secretary Jack Straw tried to claim this was because people were “contented” and so did not bother to vote.

But the plunge in the turnout was greatest in core Labour areas where unemployment is above the national average, wages are lower, and people are far from contented. And it was greatest among working class people across Britain. So the turnout in Liverpool Riverside, a constituency marked by severe deprivation, was just 34.1 percent-a drop of 17.5 percent compared with 1997. Nearly three million fewer people voted Labour this time than in 1997. The Tories lost one million votes on top of the five million they lost at the 1997 election.

The central message from these figures is that the Tories have been smashed and there is very little enthusiasm for New Labour. The Liberal Democrats’ total vote was also down, 400,000 less than four years ago.

COMMENTING ON the collapse of the numbers voting New Labour, John Curtice writes, “Some of these votes appear to have been lost on an unprecedented scale to the parties of the far left. “Others stayed at home as turnout fell most dramatically in safe Labour seats. Despite the party’s attempts to appeal to its heartlands during the campaign, there is still considerable disenchantment among some of its core voters.” Socialist candidates won some 185,000 votes.

The socialist campaign tapped the bitterness with New Labour and mainstream politicians. Everyone involved in the activity could feel that very many people agreed with the socialists’ criticism of New Labour. But only some of that feeling was reflected in the overall socialist vote. That is not surprising. This was the first time in half a century that socialists to the left of Labour made such a widespread electoral intervention.

THE MEDIA presented the election as a fight between the main three parties (with coverage for the nationalists in Scotland and Wales), squeezing socialists out of the public eye.

Many people who agreed with the points socialists campaigned over did not vote (their form of protest against New Labour), reluctantly went along with voting Labour as an anti-Tory vote, or in some cases backed the Liberal Democrats. The Scottish Socialist Party did particularly well in Glasgow, where it saved its deposits in nine of the ten seats. In Glasgow Pollok the SSP won 2,522 votes, 10 percent of the poll.

The Socialist Alliance got 2,325 votes, about 7 percent, in St Helens, and a similar vote in Coventry North East.

IN GENERAL where socialist campaigns were more established the vote was higher. In south Hackney in London 1,401 people voted for the Socialist Alliance, 4.6 percent.

The socialist vote was very significant-especially when seen as part of the wider crumbling of Labour’s traditional support. As John Curtice writes: “With the performance on the far left, it appears that Labour may be reaching the limits of its shift to the right without running the risk of allowing new competition to emerge on its left.”

Blair has no mandate for privatisation, and the socialists are well placed to build on the resentment with Blair which will grow in the second term.

“At the polls there was a real fragmentation of the electorate never seen before in British post-war politics.” 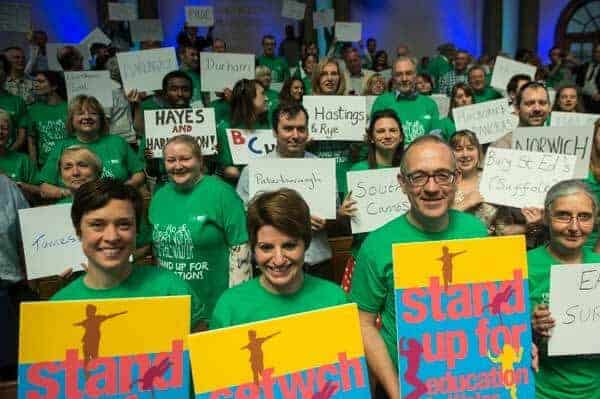 Teachers say, ‘Stand up for education’ outside parliament