This article is over 14 years, 10 months old
A strike next week by thousands of London Underground workers is part of a crucial battle over the future of our public services. The strike by employees of the failed Metronet consortium is set to start at 6pm on Monday of next week, .
By Paul O’Brien and Unjum Mirza
Downloading PDF. Please wait...
Tuesday 28 August 2007

A strike next week by thousands of London Underground workers is part of a crucial battle over the future of our public services. The strike by employees of the failed Metronet consortium is set to start at 6pm on Monday of next week, .

Workers in the RMT, TSSA and Unite unions voted overwhelmingly to strike in defence of their terms and conditions after Metronet went into administration.

The campaign that the unions have launched to bring Metronet back in-house is having a huge impact. Mayor Ken Livingstone’s Transport for London (TfL) has said that it wants to take over the running of Metronet “on a temporary basis”.

Metronet has been in administration since 18 July. It was only after we named dates for strike action that any movement was shown to meet our demands.

And we don’t want public control on a “temporary basis” – we want it permanently. All contracts, not just Metronet, should be brought back in-house.

While Ken Livingstone has expressed his preference over Metronet, why on earth is he still pursuing the inevitable disaster of the privatisation of the East London Line?

We need to make sure we keep up the pressure to make sure TfL does bring Metronet back under public control. The RMT and Unite will strike on London Underground for 72 hours from 6pm on Monday. The TSSA will start a two-day strike on Tuesday.

This hard-hitting action will severely affect services on London Underground. We will also be protesting outside the office of transport secretary Ruth Kelly next Tuesday.

Similar strikes are planned for the following week. During the second stoppage we will lobby the TUC on Tuesday 11 September and call for support from fellow trade unionists.

Metronet was responsible for two thirds of the maintenance and infrastructure of the London Underground under Gordon Brown’s Public Private Partnership (PPP).

Five major companies ran the PPP under the madness that is privatisation – WS Atkins, Balfour Beatty, Bombardier, EDF Energy and Thames Water. They ran up a £1.9 billion debt and Metronet went into administration.

Now they want the public, and tube workers, to pick up the bill. Workers face a lack of job security and retired workers are losing 10 percent of their pensions while the company is in administration.

There is even talk of the failed companies, such as Bombardier, having some of the former Metronet workers transferred over to them.

The collapse of Metronet has also exposed the risk to workers on Tube Lines, the private consortium responsible for the remaining third of maintenance and infrastructure under PPP.

The RMT is demanding assurances from Tube Lines on the future of its members’ jobs and pensions. Failing a satisfactory reply by noon on 6 September, we will be in dispute on these issues and will ballot accordingly.

Tube workers will not put up with these attacks on our conditions. The unions are right to demand that Metronet be brought back in-house and the service should be run for benefit of the public, not to make profits.

Everyone should back the fight. While the strike action will take place on the maintenance and infrastructure side there will be solidarity from operational staff, such as train drivers, signal and station staff.

We will raise safety issues arising from the strike. If crucial maintenance checks are not carried out then we will witness a cumulative effect and the system will grind to a halt.

We also need to turn the heat on our bosses and Gordon Brown. This is a major industrial dispute – but it is also political. As chancellor Brown was the architect of the failed PPP.

He paid out over £500 million to accountancy firms to draw up the failed PPP contracts.

One of these firms, Ernst & Young, is now administering Metronet. It charges £750 per person per hour for its consultants – and there’s 45 of them!

Having funded the disastrous Iraq war that nobody wanted, Brown now expects the public to bail out private companies to the tune of billions.

We seek your support for our campaigns. We have a common objective to return London Underground to public ownership – democratically accountable to you.

Paul O’Brien is an RMT senior rep on Tube Lines. Unjum Mirza is the RMT’s political officer for the London Transport region. They write in a personal capacity 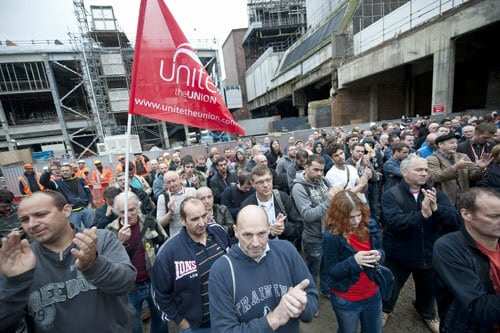