This article is over 15 years, 2 months old
Britain’s rulers are still tied to the illusion of a glorious imperial past, which in reality only benefited the elite, writes Michael Rosen
Downloading PDF. Please wait...
Saturday 28 October 2006

In Charles Dickens’s novel Great Expectations the main character, Pip, tells the story of how, as a rural, working class boy, he is invited up to the local Great House of someone called Miss Havisham.

In what is one of the most eerie and memorable scenes in all of literature, Pip is taken up into the room of someone who appears to be very rich but is also the living symbol of decay. In fact, she’s frozen in time.

As an old lady, she has preserved all around her the trappings of a wedding that should have taken place many years before. There’s even a mouldering wedding cake sitting on the table.

But this Miss Havisham isn’t a shy or humble old lady, she is tough and brutal, instructing the nasty young girl under her wing to humiliate Pip.

“Beggar him!” she calls out, when the two youngsters sit down to play cards. Now, rather than this whole scene turning Pip against such decaying and arrogant types, he recounts how he is drawn to wanting to become a “gentleman”.

This episode, and indeed the whole book, can be read many ways. But I often find myself thinking that there are ways in which we in this country live in some kind of Miss Havisham land.

Let’s take what might seem at first a huge and illogical leap to the matter of what is laughingly known as Britain’s nuclear deterrent. It was the reforming Labour government of 1945 that tied us into having the bomb.

So, at the moment when there was a popular will to bring the economy under democratic control and to break the cycle of war-slump-war, left wing leaders decided to go to the expense of developing atomic weapons.

And this was at a moment when British capitalism was in great difficulty and everyone bar the rich—who had easy access to a black market—were obliged through rationing to keep their consumption low.

By the late 1950s a head of steam was building that questioned why Britain had to have the bomb. This led to what were known as the Aldermaston marches. These were three or four day walks originally to, but then from, the Atomic Weapons Research Establishment of Aldermaston into London, taking place every Easter.

These were like walking universities of debate in which different parts of the left developed a variety of views around nuclear weapons.

As a teenager I was exposed to the usual huff and puff of school history lessons that talked of Britain’s “role in the world” and how empire had brought civilisation to the savages.

But I marched with people who asked why did Britain have to pretend it was a world power that meddled dangerously in other people’s countries as we had been (with disastrous consequences) in Malaya, Kenya and Egypt?

Why couldn’t we withdraw from the nuclear arms race and be a country like Sweden or Switzerland? After all, they didn’t have nuclear arms and it didn’t seem to make them more likely to be invaded or obliterated by a nuclear bomb.

Back at school, there were kids who would taunt those of us who had been on the marches with this matter of how we would be undefended. It seems to me now that in a way they were like Pip in Great Expectations—drawn to the decaying, vicious, illusory world of a Miss Havisham Britain, stuck in an imperial moment that had long passed.

And the crass, pathetic thing about the political establishment of today is that it peddles the same arguments about the need to defend Britain and the need to be at the centre of the great debates of the day.

But in the last 50 years, Britain has increasingly become the tiny, little yapping dog tugged into the US’s horrific efforts to grab the declining energy supplies.

The billions of pounds that our governments pour into the nuclear illusion have benefited us how exactly?

If Jack Straw muttered the odd word of dissent in the face of the neocon rush, how did our great Trident missile assist him? How useful is our pack of nuclear subs in defending civilians against bombs planted in tube trains?

And in the midst of this, we have the painful hypocrisy of British leaders lecturing the world on why they shouldn’t acquire nuclear weapons. 100 percent for arrogance, 0 percent for moral justification.

But then, the more I think of how Miss Havisham-like this decaying illusion is, I find that it links with so much of how our leaders want us to think. The latest attempt to construct “Britishness” via an assault on Muslims is a case in point.

At the very moment Miss Havisham Britishness struts about the Middle East, it demands at home an allegiance (and a symbolic disrobing) from the very people who have strong links to those suffering the effects of the British invasions and occupations.

But an allegiance to what? The colonial past that led the British to meddle in the very same countries it’s meddling in now? A state that has a cemented, established link to one religious sect, the Anglicans, while it passes judgment on other religions?

And if it’s “liberal democracy” we should all be signing up to, then as long as we have Miss Havisham in charge, it’s unfinished business.

Outrage at Israeli siege of Jericho 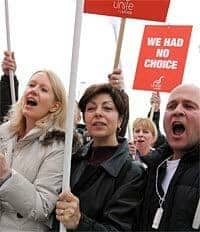