This article is over 11 years, 1 months old
This is the text of an open letter about the behaviour of the police and the injuries to Middlesex university Alfie Meadows sent out by students and staff from the university
Downloading PDF. Please wait...
Thursday 16 December 2010

We, current and former students and staff of Middlesex University, wish to make plain our disgust at the behaviour of the Metropolitan police at the demonstration against tuition fee rises in London on 9th December. A Middlesex student, Alfie Meadows, sustained life-threatening injuries and underwent brain surgery as a result of an attack by the police. Protesters wishing to leave the demonstration had been told by police to exit via Whitehall, where many were then kettled and attacked. At around 6pm, the police launched a series of unprovoked charges, using horses, truncheons and shields on protesters trapped in Whitehall. Hundreds of peaceful protesters were lined up on the south side of Whitehall and witnessed these attacks.

Over the last month, we have been witness numerous times to police attacks on young protesters, many of school age, with nothing to defend themselves but their passion, anger and sense of injustice. The spectacle of brute, armed force marshalled against the young holds up an unflattering mirror to the society that condones it.

We would also like to draw attention to the disparity between the reportage and the images of Thursdays protest. Television reporters relentlessly described the students as violent, while continually showing footage of police officers beating protesters. Do the broadcast media think that people are not intelligent enough to perceive the contradiction between what is said by reporters and what is shown via recorded images? The widespread and deliberate police provocation of protesters went largely unreported. It is also a mockery of justice to portray damage to a royal vehicle as having more importance than a potentially lethal assault by a police officer on an unarmed student.

Finally, we hope that the Government will now recognise that the problems its absurd approach to the funding of education are now generating are political problems, and cannot be resolved by the use of police force. If a Government seeks to rely on overwhelming force to maintain its position, then it will not take long for its legitimacy to crumble. 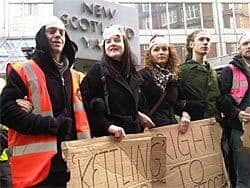 ‘Violence of police put our lives at risk’