Migration – a racist scare made of hot air 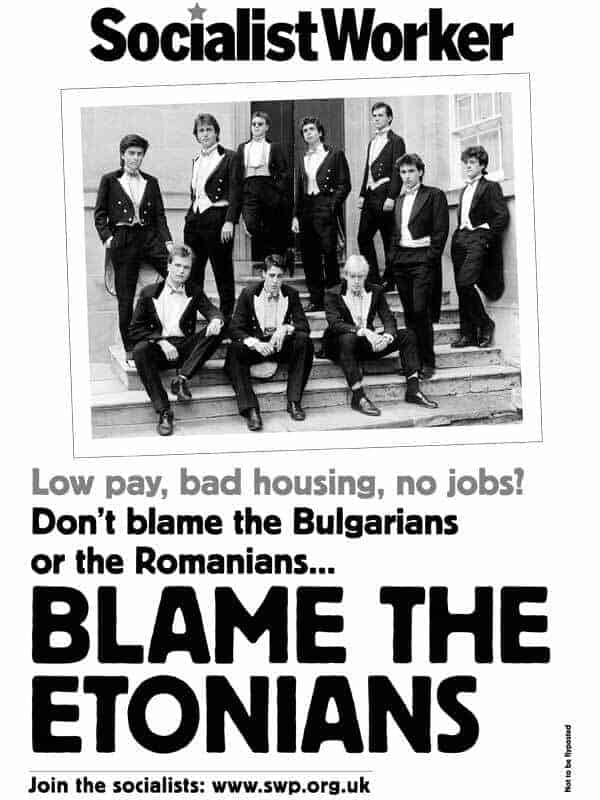 A Socialist Workers Party poster against the scapegoating of migrants

The government and right wing media have been whipping up panic. They are in a frenzy over the fact that restrictions on Romanian and Bulgarian citizens working in Britain were removed on 1 January.

In December prime minister David Cameron rushed through a block on benefits for all EU migrants for three months after their arrival.

Oddly it was a Tory right winger, David Ruffley MP, who explained why this won’t achieve anything said, “Because many want to come here to work.”

Cameron has stated that he plans to renegotiate Britain’s relationship with the European Union (EU). He said this could include a cap on EU immigration on BBC TV’s Andrew Marr show.

One reason for Cameron’s vitriol is fear that he will be outflanked on the right by Ukip. Hearing Cameron’s comments Ukip leader Nigel Farage tweeted, “David Cameron seems to be trying to sound like me. But the thing is, I believe in what I say.”

However Cameron is quite prepared to risk unleashing all sorts of racism to defend his position and his government.

On 5 January the Daily Mail newspaper ranted, “The influx of Romanian and Bulgarian immigrants has led to a surge in support for Britain leaving the European Union.”

As usual the Sun newspaper set the tone for the attacks. A front page editorial on 18 December declaring “Draw a red line on immigration or else!”

It presented a Dad’s Army-style map with arrows of invaders from Romania and Bulgaria.

This scaremongering was despite the fact that there has been no such influx. On 1 January journalists flocked to airports as the mythical hordes failed to appear.

Mladen—not his real name—is a Bulgarian maths teacher from north London, who has lived in Britain for 13 years.

He told Socialist Worker, “When I was travelling back after spending Christmas with my family there was no mass surge to come to Britain. It was just the same as normal, people who already work here coming back after the holiday.

“Back in Bulgaria the media reports talk about the arguments in Britain and quote David Cameron.

“I have yet to meet someone who has come over to Britain to claim benefits. In fact I know a lot of people who have degrees who have been doing jobs like picking blackberries.

“They do it to earn some money, not to claim benefits.”

There is a level of worry among some people about having their jobs and services undermined. This is stoked up by scare stories from Cameron and papers like the Sun.

Socialist Worker has always argued against any immigration controls. If more Romanians and Bulgarians had in fact come to Britain, they should have been welcomed.

Immigrants are not and have never been responsible for falling living standards. It is government cuts and pay freezes, and job cuts from the bosses that are to blame.

The media continues to spread all sorts of lies and half truths. It wilfully confuses Roma people with Romanians, for instance. But neither group has created social problems here.

The real race to the bottom is between politicians trying to find new ways to blame migrants.

After immigration scare - the myth of 'full up' Britain

Workers create wealth - it's the bosses who drain it