This article is over 11 years, 1 months old
The wave of protests against the cuts has reached new heights of militancy and size.
Downloading PDF. Please wait...
Tuesday 07 December 2010

The wave of protests against the cuts has reached new heights of militancy and size.

People are forming anti-cuts groups in towns and cities across Britain. In many places the marches and protests are the biggest since the Iraq war, or the poll tax under Margaret Thatcher’s Tory regime.

A procession stretching 250 yards marched through the centre of Norwich past shoppers—with some joining in—and passed applauding firefighters.

The march was organised by the Norfolk Coalition Against the Cuts. Norfolk County Council plans to slash £155 million from public services in the area.

Mark Harrison, chief executive of Norfolk Coalition of Disabled People, told marchers, “Wherever a vital service is threatened with closure, we should occupy it.”

In Coventry around 400 people joined a lively march and rally, organised by the local TUC and Coventry Against the Cuts.

The city council has announced that up to 1,000 jobs are set to go over the next four years.

Students from both the city’s universities joined the march.

David Kersey, the communications officer for Coventry Unison, argued for a campaign across the public sector unions for coordinated strikes in response to any compulsory redundancies.

He called for support for anyone who takes direct action to defend council services.

Labour council leader John Mutton addressed the crowd and agreed to support the campaign, pledging to protect jobs in the city. And socialist councillor Dave Nellist vowed to fight the cuts inside the council chamber and outside.

In Stoke-on-Trent, over 200 trade unionists, students and local campaigners joined a protest against cuts last Saturday, called by the newly formed North Staffs Against the Cuts.

Protests are also growing outside town halls as councils meet to vote on cuts.

Some 500 people rallied outside Camden Town Hall in central London for three hours on Thursday of last week in the bitter cold. Inside, the Labour-run cabinet was discussing making cuts that will devastate services and jobs in the borough.

Eight deputations were made to the council cabinet, including the Unison and NUT unions, play workers, library users, under-five workers and Defend Council Housing.

While some 100 people packed the public gallery to listen to the debate, hundreds remained outside in the snow, chanting anti-cuts slogans and listening to speeches.

Thanks to Julie Bremner, Simon Halstead and Dave Kersey, Jim Main and Luke Henderson for reports 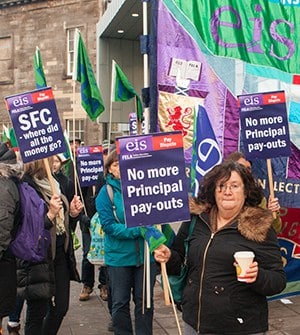