HUNDREDS OF thousands of miners striking and defeating the government. Thousands of workers occupying factories. Dockers picketing out print workers, causing the non-appearance of national newspapers for almost a week.

These aren’t the events of France today but Britain in 1972. A new book, Glorious Summer: Class Struggle in Britain 1972, by Ralph Darlington and Dave Lyddon, shows the British working class, contrary to popular myth, has a strong tradition of militant action against the bosses and the government.

The events of 1972 took place against the background of the international revolt against capitalism in the late 1960s and early 1970s. The protests against the US war in Vietnam, the largest general strike in history in France in 1968 and the rebellion aimed at the repressive regime in Czechoslovakia had inspired similar struggles across the world.

In Britain workers’ disillusionment with the Labour government, which was trying to impose wage controls and attack the unions, led to a wave of strikes in 1969-70.

The Tories, led by Edward Heath, were elected in June 1970 and attempted to use growing unemployment to cow workers into submission. They set a “wage norm” in the public sector so that each group of workers would receive an increase 1 percent lower than the group before.

They also passed the Industrial Relations Bill in 1971, which looked to curb the power of the unions and workers. There was a brief lull in workers’ struggles after the TUC allowed the Tories to isolate and defeat a postal strike in the spring of 1971.

But then in July workers occupied the UCS shipyards in Glasgow. They forced the government to act to keep the yards open and captured the imagination of workers across Britain.

Britain’s 300,000 miners came out on official national strike on 9 January 1972 after the Tories rejected their wage claims. The miners knew that to win the strike they had to stop the transport and supply of coal and other fuel to Britain’s power stations.

Workers showed solidarity with the miners’ strike on a massive level. Kent pickets turned back the drivers delivering fuel to power stations in London. Kent miners even launched a water-borne picket line against the deliveries of fuel to power stations along the River Thames. Dockers and power workers refused to handle any fuel arriving by ship because of this picket.

Many train and lorry drivers refused to transport coal or cross picket lines. The biggest display of workers’ solidarity and the most inspiring event of the miners’ strike was what has become known as the “Battle of Saltley Gates”.

Saltley, in Birmingham, was the last major coke depot in Britain still operating by 3 February. Between 650 and 700 lorries were collecting from there daily. Hundreds of miners from South Wales, the Midlands and Yorkshire began to picket Saltley to shut it down.

THE GOVERNMENT used hundreds of police to keep the depot open. For six days the miners struggled but could not, by themselves, stop the lorries collecting coke.

Arthur Scargill, then a Yorkshire miners’ activist but later to be the leader of the NUM during the 1984-5 miners’ strike, addressed a meeting of the engineering union on 9 February and argued for solidarity action. “Will you go down in history as the working class in Birmingham who stood by while the miners were battered, or will you become immortal?” he said. “I do not ask you-I demand that you come out on strike.”

The next day around 40,000 workers in Birmingham came out on strike in support of the miners. Some 10,000 marched down to join the picket. The overwhelming numbers against them forced the police to close the gates to Saltley, much to the joy of the miners.

This was the crucial victory in the strike. As power cuts occurred throughout the country and hundreds of thousands of workers were laid off, the government was forced to make a deal with the miners.

The Tories offered the miners a 20 percent wage increase phased over 16 months. This was not enough, and further concessions had to be made to the miners before the strike was called off.

The Tory home secretary at the time, Reginald Maudling, described the government as “wandering around the battlefield looking for someone to surrender to”. This victory inspired other workers to fight.

Around 25,000 engineering workers in Greater Manchester occupied up to 30 factories from March to May in support of their union’s wage claim. The union’s lack of national action and the funding of the engineering employers by other bosses meant the sit-ins were beaten.

The most significant struggle, along with the miners’ strike, was the dockers’ fight against the containerisation of goods which cost jobs. The dockers had been fighting this throughout the 1960s but it exploded as an issue in 1972.

Dock workers in Liverpool began to picket the new container depots and in March blacked lorry firms that used these depots. This form of action soon spread to the rest of the country.

Three London dockers were threatened with prison for picketing the Chobham Farm container base in June. Some 35,000 dockers struck unofficially throughout Britain in support of the pickets, and hundreds joined the picket of Chobham Farm the day the arrests were expected.

The charges were dropped. This increased the confidence of the dockers and the pickets spread. At the beginning of July Midland Cold Storage, owned by the giant Vestey group, applied to get the picket of its east London depot removed. The NIRC ordered the picket removed.

When the picket continued, five dockers, named in Midland Cold Storage’s application, were arrested on Friday 21 July and sent to Pentonville prison. Every docker in the country came out on unofficial strike and Pentonville prison became the new centre of the dockers’ mass picketing.

The dockers decided that the first step in ensuring the release of the jailed pickets was to close down the national newspapers. Scores of dockers “went down Fleet Street marching from paper to paper in a procession of shouting and leafleting, and cheering and arguing,” a docker said. “We had a magnificent leaflet. It had ‘Five Trade Unionists Are Inside-Why Aren’t You Out?'”

The Sunday Mirror was the first to stop work. There was then a domino effect. Only the Sunday Times was printed. From Monday the national daily newspapers, the London evening papers and the evening papers in Liverpool and Manchester were not published until Friday 28 July.

Around 250,000 workers struck unofficially before the dockers were released on the Wednesday. The pressure forced the TUC to call a general strike for the following Monday, but it was not needed as the Law Lords overruled the decision of the NIRC and freed the imprisoned dockers.

An official dockers’ strike began the next day. This continued for three weeks before Jack Jones, the leader of the dockers’ TGWU union, made an agreement with the government against the wishes of the dockers.

There were other big working class fights in 1972. Some 300,000 building workers took part in a national strike, school students went on strike in London, and tenants launched rent strikes in over 80 towns and cities.

Britain saw its biggest wave of strikes and protests since the 1920s. The struggles of 1972 showed that by the use of militant tactics, which went beyond the demands of the union leaders, workers could beat a Tory government which was on the offensive.

The solidarity action the miners and the dockers received from other groups of workers meant the Tories’ anti-union laws could be broken and beaten. Yet the official leaders of the unions were not prepared to build on these successes. They spent the autumn trying to negotiate a deal with the Tories and allowed them to get away with imposing a wage freeze in November.

The government got a reprieve until a new miners’ strike in early 1974 forced them to call an election on “who runs the country”, which they lost. The strikes and protests of 1974 show the potential that working class people have to challenge the system.

As the historian E P Thompson wrote during the week of the power cuts caused by the miners’ strike, “For the future historian it will seem that this week of darkness, in February 1972, was an incandescence.”

Glorious Summer is a fascinating and detailed attempt to capture a period of British workers’ history that needs to be known by everyone who wants to challenge New Labour and the bosses today. 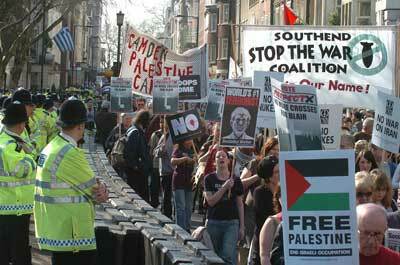 Pictures of London demo against Iraq war and occupation, 19 March