Military Families last week won their appeal against the government’s decision to refuse a full public inquiry into the Iraq war.

They had argued that the war was illegal and based on lies. Their sons had died as a result of these lies.

There will now be a judicial review of Tony Blair’s decision to not allow a public inquiry.

Since the beginning of the war in 2003, 114 British servicemen and women have been killed in Iraq.

Rose Gentle’s son Gordon was killed in Iraq in 2004. She told Socialist Worker, “Gordon was in Iraq to fight for his country, but I now know he should never have been sent there. He died for nothing.

“I have done everything in my power to persuade Tony Blair to meet with me, but he refuses. Now I will finally get to see what the government has to justify its decision to invade Iraq, which most of the public believe was unlawful and counterproductive.

“My message to Tony Blair is – you have refused to meet me in Downing Street, now you will meet me in court.”

The families’ solicitor Phil Shiner said “The government now have to produce evidence to a full hearing in the court of appeal.

“In particular, the government must finally explain how the 13-page equivocal advice from the attorney general of 7 March 2003 was changed within ten days to one-page completely unequivocal advice that an invasion would be legal.”

The hearing is due to take place on 6 November. 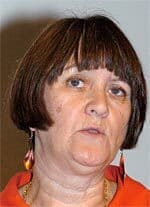 Lynda Holmes: Military families are speaking out against war