THE MORNING Star (the paper of Britain’s very small Communist Party) and the mainstream press found themselves in full agreement last week. Both agreed that people in Serbia were in revolt against a government that was in some ways socialist.

For the Daily Telegraph this was cause for rejoicing. For the Morning Star it was a disaster-its front page proclaimed, “Arson Rules In Belgrade” and “Pro-Capitalist Demonstrators Burn Parliament” the day after Milosevic’s fall. Any such analysis profoundly misunderstands the nature of the regime. Milosevic, a banker turned politician, was elected president of Serbia in 1987. But he came to real power in 1989. His rise was one terribly twisted product of the revolts that swept Eastern Europe that year.

Yugoslavia’s workers were in mass revolt against the austerity policies which were demanded by the world’s bankers and implemented by their local leaders. Milosevic feared that he would go the same way as Romania’s Ceausescu, who was toppled by revolution in 1989. In order to fracture the opposition, Milosevic pumped out virulent nationalism. He revoked Kosovan autonomy and then led Serbia into war with Slovenia and Croatia.

His simple message was to blame the Kosovan Albanians or Croatian workers for the problems in society. The strategy of nationalist scapegoating-which was mirrored by other Balkan rulers-enabled Milosevic to survive. But it was not overwhelmingly popular. Around 500,000 people fled the country rather than fight Serbia’s wars. At the start of the action against Slovenia around 80 percent of Serbs supported the “preservation of peace by any means”, and 23 percent did not consider the war worth fighting.

Twice during the 1990s people in Serbia rose up in mass movements which threatened to oust Milosevic. There was a wave of mass protests on the streets of Belgrade on the eve of Yugoslavia’s descent into bloody civil war in March 1991. Up to 250,000 people occupied the city centre and brought Belgrade to a halt for five days. The focus of the protests was government repression and censorship. But the protesters built on a much wider feeling against the luxuries of the rich, the increasing unemployment and the starvation wages workers received. By April 1991 some 700,000 Serbian workers were on strike for higher wages and the British Financial Times could report that “labour unrest is the greatest threat to the Serbian government”. In 1993, at the height of nationalist frenzy during the Bosnian war, there were anti-war demonstrations in Belgrade and Bosnian Serb soldiers mutinied at Banja Luka.

Milosevic was nearly toppled again in 1996 as mass protests took place for an incredible 100 days in succession. The Morning Star says that last week’s “people’s revolution will soon be followed by people’s privatisation, people’s closure of industrial enterprises and people’s dole queues”. But Milosevic was happy to plunder state assets and hand them over to his cronies or members of his family. He privatised the valued Trepa mines in Kosovo, selling them to a Greek multinational.

He also presented monopoly franchises to favoured supporters to run sanctions-busting schemes. They became millionaires overnight, profiting from the shortages and the suffering of the Serbian people. Milosevic presided over closures of factories and 30 percent unemployment. He was the enemy of the workers in whose name he pretended to speak. Far from being a left winger, Milosevic had politics similar to those of Tory Norman Tebbit: authoritarian, scapegoating, for harsh discipline in production, and bitterly against workers’ democracy. Milosevic was also similar to Vladimir Putin in Russia, who the West loves so much. Milosevic was neither a Stalin-style dictator nor a fascist (as the West claimed a year ago).

As the Guardian’s Balkans expert Johnathan Steele wrote this week, “For the party elite Milosevic provided rewards, protection and privileges plus the chance for a few to get unusually rich. Indonesia’s crony capitalism under Suharto is a more accurate parallel.” It suits Robin Cook and Bill Clinton to say that Milosevic is some sort of socialist. The left should not help them out. Instead we should urge on all the most dynamic elements that were on the streets last week to keep fighting for real change and to make a workers’ revolution. 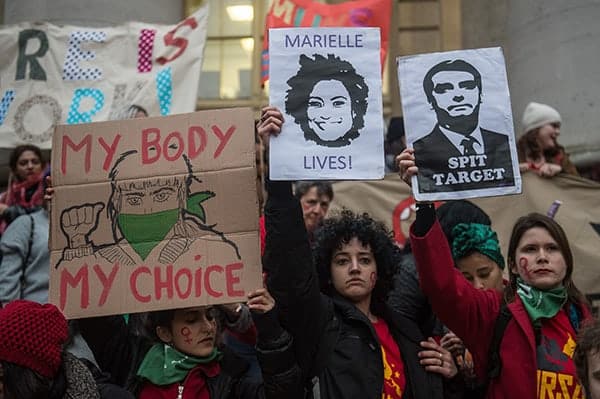 Reports round up: Big protests for International Women's Day

Back Jerry Hicks for Unite leader