Minister caves in to Islamophobia

This article is over 11 years, 7 months old
A dangerous precedent of climbing down in the face of pressure from the EDL was set last week.
Downloading PDF. Please wait...
Tuesday 22 June 2010

A dangerous precedent of climbing down in the face of pressure from the EDL was set last week.

Theresa May, the new Tory home secretary, responded to the EDL’s plans to protest in Wembley against Muslim scholar Zakir Naik by banning him from entering Britain.

May is reportedly also considering banning Bilal Philips, another Muslim scholar who had been due to speak in Tower Hamlets.

Tower Hamlets council pressured the Troxy venue to call off an Islamic conference Philips was due to speak at following the EDL’s call for a protest.

Both Philips and Naik have visited Britain on several previous occasions.

According to the Guardian “their speaking tours have passed by without incident”.

Yet Geert Wilders, a vicious Muslim-hater, was allowed into Britain and given permission to speak in parliament.

Caving into racists and Islamophobes will only strengthen them. 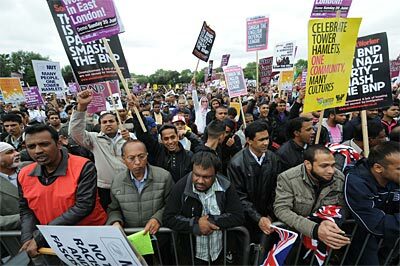