This article is over 15 years, 11 months old
Hundreds of Ministry of Defence (MoD) workers from around the country lobbied their employer’s headquarters in central London on Wednesday of last week.
Downloading PDF. Please wait...
Saturday 04 February 2006

Hundreds of Ministry of Defence (MoD) workers from around the country lobbied their employer’s headquarters in central London on Wednesday of last week.

The workers from the PCS, Prospect and Amicus unions were protesting against privatisations and job cuts.

Callum Campbell from the PCS in Glasgow told Socialist Worker, “Just like workers in the Department for Work and Pensions are striking over job cuts, we are fighting against up to 20,000 job losses across the MoD. We’re holding an indicative ballot about taking action over these cuts.”

A PCS member from Telford added, “Around 130 of us have come here from Telford where Abro Donnington is threatened with closure.

“This means that 2,000 civil service jobs will be lost in Telford. This will devastate the local area. Everyone is up in arms about this.”

Brett Davis is the deputy convenor of Amicus at Abro Donnington. “This is all part of New Labour’s neo-liberal agenda,” he told Socialist Worker. “We need action across the sector to stop this.

“I’d love us to be closing down if our skills were to be used to produce socially useful things – but we’re being flogged off to BAe Systems. It is a Halliburton solution.

“The government gets involved in a war and then calls up a private company to provide services and make massive profits.

“This is despite it costing more. It is about Tony Blair’s free market ideology. People should have sympathy with public sector workers fighting to keep their jobs.”

Journalists right to start the offensive 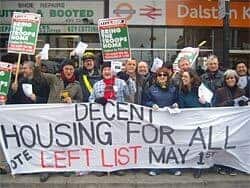 Getting message out across the capital 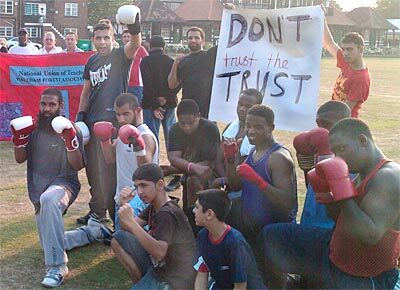